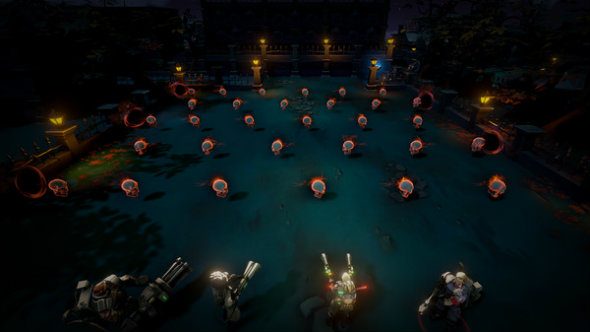 Almost as soon as FireForge Games released their twin-stick shooter tie-in for the new Ghostbusters movie, they filed for bankruptcy. The game launched on July 12, and throughout the rest of the month the company was busy liquidating assets to pay off a debt of at least $12 million, according to bankruptcy filings.

The Ghostbusters game was, by all accounts, not very good. Luckily, you can shoot dead people in our list of the best zombie games instead.

Bankruptcy was filed on July 15, just eight months after development on the game began, just in-case you thought the days of money-grabbing film tie-ins were behind us.

However, as Kotaku report, it seems the company’s bad luck began before they even strapped on a proton pack. Since being founded in 2011, FireForge have worked on two MOBA-style projects – one to be published by Razer and the other funded by Chinese publisher Tencent, who also own a 37% stake in FireForge – and both have since been cancelled.

FireForge have been entangled in a lawsuit with Min Productions, a Singapore-based firm owned by Razer CEO Min-Liang Tan. The developers also owe around $11.3 million to Tencent.

The lawsuit accuses FireForge of using money from the Razer MOBA project, called Zeus, to work with Tencent on the other MOBA-stle project, called Atlas. FireForge deny this claim, saying they worked with Atlas after Razer stopped paying them. The bankruptcy claim has put the lawsuit on hold.

Tan alleges that FireForge failed to deliver on their contract while developing Zeus, and instead used the money to work on Atlas with Tencent. FireForge, on the other hand, says they only started working on Atlas once Razer had stopped paying them. The lawsuit is currently on hold as Fireforge sorts out their bankruptcy proceedings.

FireForge were also sued in 2015 by Richard Land, a lawyer responsible for selling off the games and IPs of 38 Studios after the company’s closure. Land says FireForge reneged on a deal to license 38 Studios’ social media platform for $3.7 million, instead hiring ex 38 Studios staff to build their own.

While Ghostbusters is getting panned, it’s clear that FireForge’s latest game being actually good was the least of their problems.