Star Control creators Paul Reiche III and Fred Ford have filed a countersuit against Stardock Systems, claiming Stardock are infringing on their copyright, not the other way around.

Back in December last year, publisher Stardock Systems filed a lawsuit against the original creators of Star Control.

If it weren’t for Star Control, we probably wouldn’t have Mass Effect. Check out these and other notable sci-fi classics in our starfarer’s shortlist here.

Stardock claimed the creators infringed upon the copyright of the Star Control franchise – which Stardock bought from Atari in 2013 – with their sequel game Ghosts of the Precursors.

In response, Reiche and Ford have nowfiled a countersuit against Stardock in an attempt to take back control of Star Control and Star Control 2.

Reiche and Ford claim Stardock is infringing on their copyright by selling Star Control 1 and 2. They are asking the courts to put an injunction in place to stop Stardock selling the games, using any of their creative materials, and engaging in “other forms of unfair competition.” They also ask that all revenues Stardock have made from the games be paid to them.

In 2002, when Atari (then Accolade) stopped selling Star Control 1 and 2, and their agreement with Ford and Reiche expired, the pair released an open-source version of the games called The Ur-Quan Masters, encouraging fans and other developers to modify it. The countersuit also asks for Stardock to stop using the trademark “The Ur-Quan Masters.” 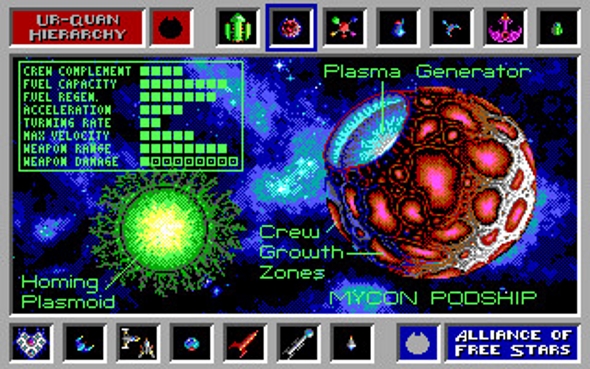 Reiche and Ford are currently working on a sequel to The Ur-Quan Masters called Ghosts of the Precursors. However, Stardock’s initial lawsuit is an attempt to shut it down – Stardock claim they acquired exclusive rights to the Star Control franchise when they bought it from Atari, but the Reiche and Ford claim Atari did not own the rights to the games they worked on, and thus the copyright lies with them.

“Star Control is a pair of games we created at the start of the computer gaming revolution,” Reiche says in the press release published alongside the countersuit. “Now, largely as a labor of love, we are returning to the universe we created to update it with new adventures, characters, and worlds. Stardock seems to think not only are we not the creators of Star Control, but they claim to have the exclusive rights to sell our games and otherwise use our alien races, ships, narrative, and other creative materials without our permission. This is why we felt compelled to file our counterclaim today to stop Stardock’s theft of our games, copyrights, and the universe we created for ourselves and our fans.”

However, in a Star Control forum thread called “Stardock’s response to Paul and Fred”, CEO of Stardock, Brad Wardell (aka Frogboy), told one user that Reiche and Ford are not just claiming to own their own content, but “everything within the game itself”.

“There’s no evidence to support that and plenty to the contrary. However, Stardock isn’t claiming to own those assets so it’s kind of irrelevant,” Wardell wrote in the forum. “Stardock can include the SC2 aliens but out of respect for Paul and Fred chose not to. The last part on sale and distribution looks correct to me except, again, Star Control is a trademark, not a trade name. There is a common misconception that trademarks only protect the name of a product.”

Stardock also created a thread on their forum, titled “Q&A regarding Star Control and Paul and Fred”, where the company emphasises they are “the legal owner of the federally registered trademark for Star Control”.

“Paul and Fred were the designers of Star Control 1 and 2. For many years, however, Paul and Fred have represented themselves as if they personally created the games themselves,” the Q&A states. “We believe this was in an effort to associate themselves personally with Star Control without having the legal right to do so. In reality, it was a great team of talented folks that Paul and Fred gathered together to develop the game.”

“Our only goal is to protect our ability to tell more stories in the Star Control multiverse,” the Q&A continues. “We remain fans of Paul and Fred and their contributions to Star Control. However, given the confusion they’ve created in the market by promoting their new game as a ‘true sequel’ to Star Control 2 combined with their abuse of the DMCA system to take down even Star Control games they had no involvement with, we are forced to act to prevent them from continuing to create confusion.”

Update December 4, 2017:Stardock have responded to a blog post from Ghosts of the Precursors developers regarding the legal rights to the Star Control franchise and its various component parts.

After a short initial response from CEO Brad Wardell on the forums, Stardock have now issued a longer, official comment on a blog post from Star Control’s original design team regarding the rights to the franchise. In it, Stardock make clear that they “want them to make Ghosts but we don’t want any liability or association with it.”

Wardell’s initial response is on the forums here, with the longer comment posted the next day. You might need this quick primer on Star Control Intellectual Propertyas a starter. Stardock’s statement ends by saying that “given the disturbing and unanticipated post by Paul [Reiche III] and Fred [Ford], we are persuaded more than ever that a clear and irrefutable document that makes it clear that we are not associated or involved with their new game is needed.”

Reiche and Ford haven’t yet responded on their blog. Brad Wardell followed up on Twitter by making it clear that Stardock do not “want to keep them from doing their game” and are confused by the implication.

Original post December 2, 2017:Outside of Stardock’s plans to developa Star Control prequel, the original lead developers of Star Control 2 had recentlyannounced their plansto begin work on Ghosts Of The Precursors, a truesequelto Star Control 2 (we don’t talk about SC3), officially minus the branding, but set in the same familar universe.

It had seemed too good to be true, and both Stardock and the original dev duo (Fred Ford and Paul Reiche III) seemingly had the situation in hand. Unfortunately, that doesn’t seem to be the case today, according to this newGhosts of The Precursors dev-blog post.

The Ghosts of the Precursors developers question Stardock’s absolute ownership of the Star Control rights from a bankrupt Atari. The purchase was apparently for just the Star Control name and some concepts involved in Star Control 3, which we will continue not talking about.

Fred and Paul imply that, unless something changes, Stardock are now blocking them from continuing development using any of Star Control’s familiar races, locations and names (branded or otherwise). On top of this, they question Stardock’s right to re-sell the original three Star Control games, claiming that they do not believe that such legal permission was included in the rights purchase.

This article has been updated to remove speculation.