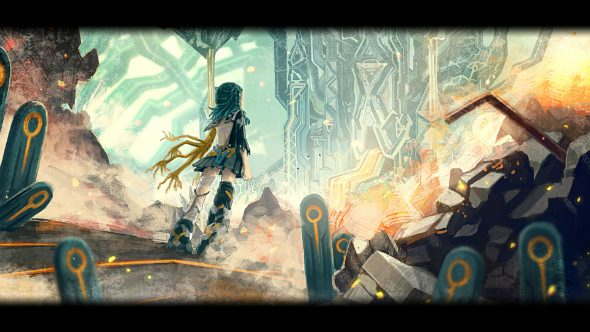 Game Freak, the Japanese studio behind literally every Pokémon game, have sent their 2D action-puzzler Giga Wrecker onto the perilous road of Steam Early Access.

Much like the company’s only other foray into PC gaming, Tembo the Badass Elephant, you smash your way through levels by throwing a ball, this time comprised of debris from other stuff you’ve smashed up.

See, you play as a cyborg girl with the power of ARCHE which, as everyone knows, stands for ARms Creating and Handling Effect. While completely self-explanatory, we’ll just clarify that yes, this power does allow you to “construct various weapons using rubbles and scraps from broken objects.”

Those weapons range from a big ball, to javelins or swords or even drills, the most powerful of rubble-destroying weapons.

The stated release window for Giga Wrecker is January 2017, if it smashes its way through the gauntlet of Early Access, and is available right now for $14.99/£10.99.