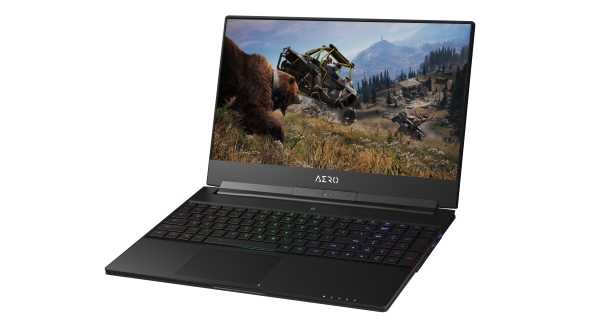 The brand new Gigabyte Aero 15W is the first laptop to arrive in the office with the six-core Intel Coffee Lake mobile chip inside it. And that’s not the only improvement Gigabyte have made to one of my favourite ever gaming laptops.

When I checked out the original Aero 15 last year, after having a very brief, lustful daliance with it in Taiwan at Computex, I was rather blown away. Its mix of slimline aesthetic, dimension-warping bezel-less screen, and unexpected gaming performance made it a genuine object of desire. And now it’s back, with a slightly redesigned chassis and one of the first mobile six-core gaming chips ever made.

A gaming laptop has to have one of the best gaming mice plugged in to make it perfect.

That Intel Core i7 8750H is a six-core, 12-thread CPU with a 2.2GHz base clockspeed, but a maximum boost of 4.2GHz, all in the same 45W TDP that Intel gaming chips have been rocking for the past few generations. There’s also a pretty healthy 9MB of cache memory on there to give it some backup too.

Inside the Aero 15W’s restricted chassis you’re not going to be getting that high a clockspeed, but we did see it regularly hitting 4.1GHz when thrashing through single-threaded workloads, and up to 3.9GHz under full all-core loads. That said, under seriously heavy multi-threaded torture testing it did drop down to around 3GHz when really pushed.

Along with the brand new Intel Coffee Lake six-core CPU, our review sample was kitted out with 16GB of DDR4 memory running at 2,667MHz. Unfortunately, unlike our original Gigabyte Aero 15, this ‘W’ version is only running in single channel mode. We spoke to Gigabyte and they maintained it was down to price – given the staggering rise in memory pricing at the moment that is understandable when they’re trying to keep it under a certain level.

That said, at £1,999 you’d hope not to be making the sort of sacrifice that will literally halve your available memory bandwidth. For gamers that’s not going to be a real issue as it won’t impact frame rates, but Gigabyte are aiming this at professionals too – photographers for example – and that sort of productivity can thrive on good memory performance.

For gamers though we’ve got the lovely GTX 1060 6GB graphics card at the heart of the Aero 15W, and that makes it a great little gaming laptop. Paired with the beautiful, almost bezel-less 15.6-inch IPS 1080p screen, that means you’re able to play the latest games at high settings at the machine’s native resolution. 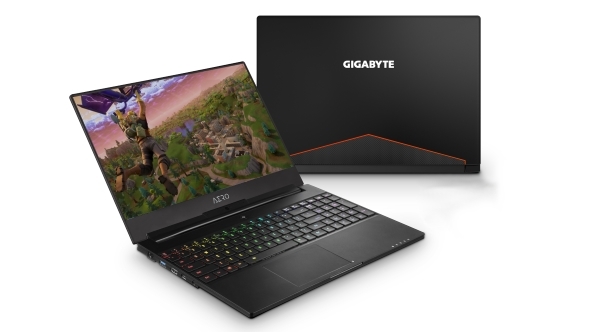 Not only have Gigabyte performed the same miracle they did with the previous Aero 15 – namely getting a 15.6-inch screen into a 14-inch chassis – they’ve also upgraded from the 60Hz MVA to a 144Hz IPS panel. That means the images are crisp, bright, colourful, and gaming is perfectly smooth. It’s not a G-Sync display, however; they’ve saved that for their higher-spec Aorus machines. Shame.

In terms of storage there’s a capacious 512GB M.2 Crucial MX300 SSD inside it, giving you plenty of space for a decent number of games on the go. While you’ll need a good gaming mouse to take your gaming mobile the keyboard won’t be an issue – yes, the Aero 15W has full per-key RGB lighting. Vital for gaming, that.

But it’s also a very good keyboard to use, and not just to gaze adoringly at. It’s not a mechanical keyboard, but it certainly doesn’t have the deadened feel you get from a lot of chiclet keyboards. There’s a definite resistance to it which feels reassuringly solid under your fingers.

In terms of the overall performance it’s very impressive for such a skinny machine. While we’re on about that skinny chassis, the Aero 15W has been on a diet. Gigabyte have actually managed to make it even smaller, shaving another millimetre off the thickness of the design and made it lighter still. Normal PCs this size don’t have a gaming graphics card in them, and if they do they cost Razer Blade money. That said, there isn’t a huge difference in performance between this updated, six-core Aero 15W and the original quad-core Aero 15.

The Core i7 8750H does give it the edge in CPU-intensive tasks, but not in gaming. We haven’t seen this sort of CPU power from any mobile Intel machine before… but Asus have unleashed an eight-core, 16-thread laptop on us, in the shape of the excellent ROG Strix GL702ZC. But that’s using desktop components, has half the battery life, weaker gaming performance, and is about twice the size. It is around £500 cheaper, but you gets what you pays for… 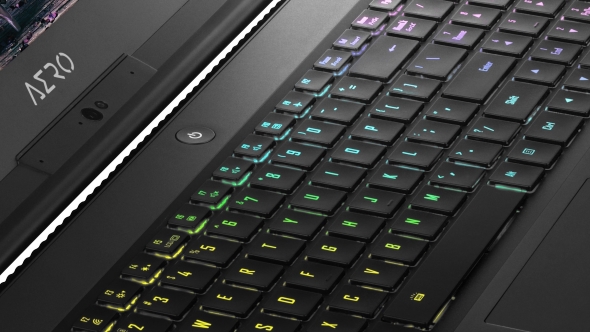 But ah, that battery. Gigabyte have stuck with the same 94Whr juice box, which gives the Aero 15W some unprecedented gaming chops away from the plug. We measured a full 108 minutes of full 3D gaming time, giving you almost two hours of fun free from the wall plug. The caveat is that the GTX 1060 was automatically limited to 30fps on battery mode, enabling it to extend its uptime, but that’s not too shabby anyways. The frame rate did drop significantly at below 20% as Windows’ battery saving mode kicked in.

But those are all configurable from within the impressively capable Smart Manager application. There’s almost zero pre-installed bloatware on the device, but the Gigabyte management software is worth keeping around. It lets you manage fan profiles on the fly and adjust the colour of the Pantone certified screen too.

It’s handy because, by virtue of its tiny form factor, it does need to wind up its fans when you’re giving it something serious to do just to keep things at a manageable temperature. It’s probably worth playing with the custom fan curves to tailor your experience as it can get blowy.

And that’s probably my only real issue with the latest Aero 15W, but given the size of it and the cooling potential it offers, a little fan noise when you’re thrashing the graphics card can be forgiven.

Of course, with that £1,999 price tag, it’s still more expensive than a simple tech journo could afford to spend on anything he can’t live inside of, so it’s out of my price range, but if you can spare a couple of grand for a gaming laptop, then this is a fantastic choice and a definite upgrade on the already excellent original.