Another Gigabyte gaming laptop has scooted across my desk: the Sabre 15. Within its black frame lies some seriously mobile beefy silicon: Nvidia’s GTX 1060 and Intel’s 8th Gen hexacore Core i7 8750H. An impressive loadout capable of delivering 1080p gaming at its very finest. But it’s the smart compromise and anything but ostentatious design that make this laptop a worthy mid-range gaming laptop.

The Sabre 15 makes for stark comparison to the over-the-top aesthetic of some of the Gigabyte Aorus devices we’ve had in the office for review. Its rather more gentle angular accents and mono-colour design make for a clean-cut look, although one that utilises noticeably less ‘premium’ materials than some gaming laptops or professional notebooks.

At £1,457 the Sabre 15 is remarkably good value in a competitive market filled with rival companies vying for your love (but mostly your money). It’s hard to argue that anything over 1K is a bargain, but the Sabre 15 is certainly a better value proposition than Gigabyte’s outlandish Aorus lineup. That value-conscious territory comes with some compromises, however, although few that are overtly negative.

Within its weighty shell, the Sabre 15 has enough space for both a 2.5-inch HDD and a single M.2 PCIe x4 NVMe SSD. These are both accessible through the plastic underbelly of the laptop, which is held on by an ungodly number of screws. The two SODIMM slots are also accessible this way, so, to avoid the back and forth of screwing and unscrewing the Sabre 15’s case, I’d recommend saving up all your upgrades for one super fun day. 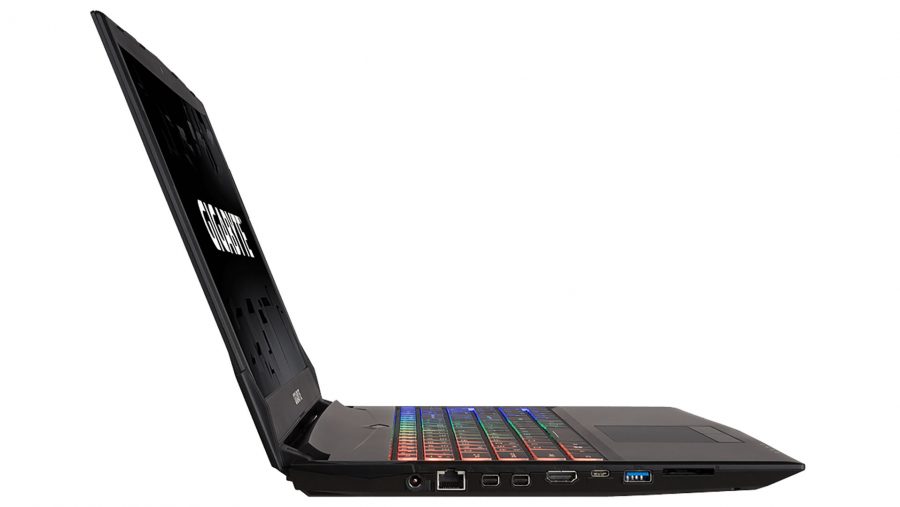 As tradition demands, the keyboard is fully RGB-backlit, but Gigabyte has also seen fit to cram a numpad onto the Sabre 15. Considering I’m au fait with key switches (essentially I’m a mechanical elitist), I often can’t stomach anything less. However, I got along with the Sabre 15 perfectly well. The keys have a good travel distance and feel responsive without too much unwanted squishiness.

Yet for any compromises made elsewhere, Gigabyte hasn’t given any ground on the specs. Within the Sabre 15’s chassis lies one of Intel’s most high-performance mobile processors to date. The six-core, 12-thread i7 8750H clocks at 2.5GHz but can reach 4.1GHz when required. 16GB of DDR4 was enough to keep this CPU tearing through computationally-intensive tasks, managing a Cinebench R15 multi-threaded score of 1,214. That’s just shy of the behemoth Aorus X9 and its equally-threaded i9 8950HK at 1,263.

Considering the significant difference in price between the Sabre 15 and Aorus X9, £1,400 to £3,700, the four percent decrease in processor performance is more than a little bearable.

While the GTX 1060 is far from the top-performing graphics chip on the market, it is perfectly suited to the the Sabre 15’s 15.6-inch 1080p display. This VA panel is capable of a 120Hz refresh rate, and while you won’t always be hitting that in the very latest and greatest AAA titles, there are plenty of competitive shooters capable of taking full advantage.

Across our benchmarking suite, the Sabre 15 utilises its generous chassis size to its advantage, trading blows with the similar spec Aero 15W. The significant Z-height of the Sabre 15 allows it to get a little more out of that mid-range Nvidia silicon than the slim and lightweight Aero 15W, although that doesn’t count for much performance when it comes to pure gaming performance. 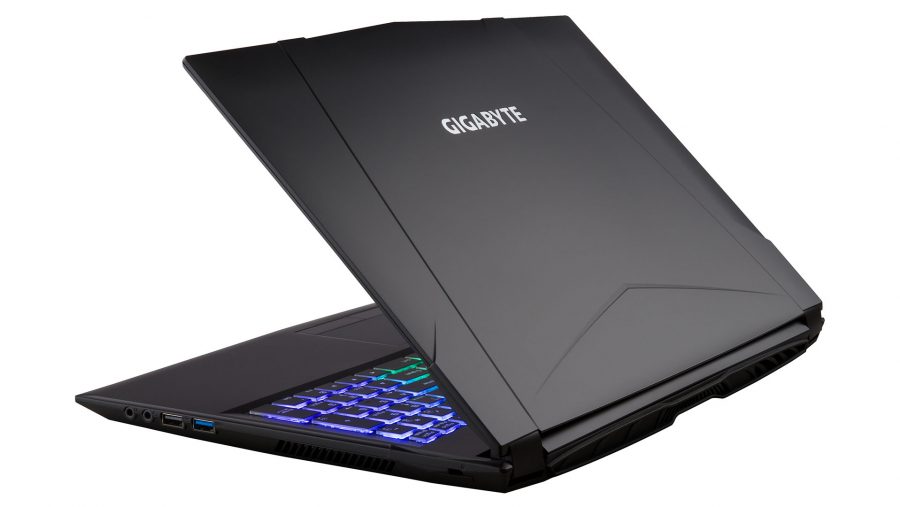 3DMark Firestrike and Heaven both score highly for the Sabre. While gaming performance isn’t equally stunning, this innocuous gaming laptop manages to deliver well over 60fps in Rise of the Tomb Raider and GTA:V with ultra (or equivalent) graphical settings in place. That’s roughly on par with the Aero 15W, no easy feat even with the extra real estate.

The Sabre 15 joins Gigabyte’s lineup as a powerful system that tows a moderate line. Its specs are weighted towards strong 1080p performance and it hits that performance bracket admirably and with ease. With a specs list fit for gaming, productivity, and even light editing work, the Sabre 15 makes the equitable compromises to keep its price reasonable without sacrificing what gamers want: performance and value.

Gigabyte is offering a remarkably strong spec sheet with the Sabre 15. It’s not the smallest or lightest laptop in its performance bracket, but it's a damn sight cheaper than most. The Sabre 15 is conservative where needs be, without sacrificing top 1080p performance.