The only way to go beyond four cores with Intel is to step up to an X99 motherboard, like the Gigabyte X99-Ultra Gaming, and the six, eight and ten core processors it supports. The gaming PCs of the future are going to be more reliant on core count than ever before and until Intel bring six-core CPUs into the mainstream this is where your best bet for future-proofing lies.

Want to get the most out of your current CPU? Check out our beginner’s guide to overclocking.

With the impressive six-core Intel i7 6800K only $100 (£100) more expensive than the top-end quad-core Skylake i7, putting together a powerful gaming rig with a high-performance CPU isn’t entirely out of reach. But why should you consider making the step up? If you are looking towards the upper echelons of PC gaming, into the great 4K yonder, then an X99 board is the best place for multi-GPU systems to deliver proper Ultra HD gaming performance.

And with such high-end graphics arrays you need a platform capable of keeping pace and the X99-based Broadwell-E CPUs are able to push your GPUs further with processor-intensive titles like the Total War games or the latest iteration of the Frostbite engine in the upcoming Battlefield 1.

I know, I know, some of you impatient sorts just want to get to the nitty gritty. Click on the quick links below to get to benchmarks or all-important score.

The striking X99-Ultra Gaming is one of Gigabyte’s high-end motherboards for the X99 platform and boasts a mighty impressive specs sheet to go with it. As an X99 board the Ultra Gaming provides support for the latest Broadwell-E processors all the way up to the Core i7 6950X ten-core monster.

And as part of Intel’s high-end desktop (HEDT) line it also provides support for quad-channel DDR4, with the potential for a massive 128GB of system memory, running at speeds of up to 3,600MHz. Though if you want to go server-side crazy you could spend big on some Registered DIMMs up to a massive 256GB. You know, if you were utterly dead-set on building yourself a server farm.

As I mentioned earlier, the X99 platform is the best setup for multi-GPU gaming, and as such the X99-Ultra Gaming comes with support for both Nvidia’s SLI and AMD’s CrossFireX technology, in up to four-way trim. I’m not entirely convinced you’ll get many cards capable of operating in four-way though; single-slot coolers went out with the 9800GT. Three-way then is realistically going to be your maximum.

It is though optimised for two-way arrays, with two of the four x16 PCIe 3.0 slots running at full x16 speeds with an increase in space between them to avoid unnecessary overheating between the GPUs. The third and fourth slots only operate at x8 speeds, but given that even a 6950X lacks the requisite 64 PCIe lanes to cope with a full four x16 slots that’s not really an issue.

Gigabyte have also shiny’d up their PCIe slots with a stainless steel shield. Initially I thought that was purely for aesthetics, but it’s also there to provide a little extra strength to the connection when there are heavy graphics cards in place and the motherboard is mounted vertically.

The X99-Ultra Gaming is chock full of storage options too. There are a host of SATA 6Gbps connections, six of which natively support RAID for combining storage drives. There’s also a single, full-length M.2 socket and even a U.2 connection for the few PCIe-based SSDs which support it. 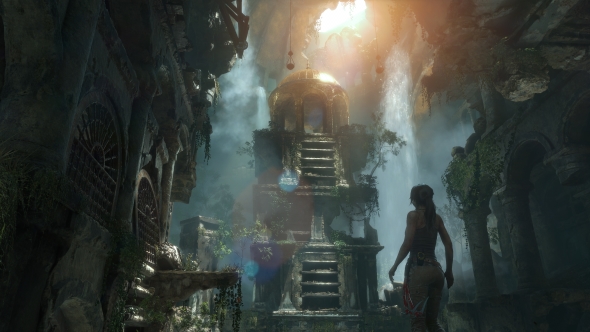 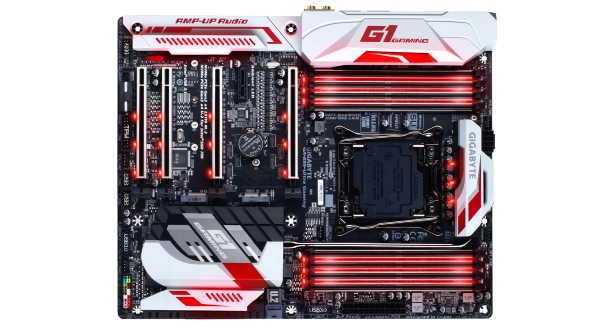 As the name suggests, this Gigabyte X99 is a gaming board. It used to be that if you wanted the best gaming performance a motherboard would allow then you picked an Asus board, no question. That gaming dominance now seems to have passed over to Gigabyte as their boards, more often than not, provide just that little bit extra GPU performance.

That’s born out by the Gigabyte X99-Ultra Gaming’s benchmarks for both 3DMark Fire Strike and the DX12 Rise of the Tomb Raider tests. Put up against Asus’ higher-priced X99 Deluxe the Gigabyte board just has the edge.

Things are very different in the Total War benchmark however, but that is more indicative of the fact that Asus still has performance sewn up when it comes to general CPU power. The Total War games are very CPU-intensive, so when you take the GPU out of the equation (running at 1080p with GTX Titan X) you can see the disparity between the Gigabyte and Asus performance.

And that disparity in CPU performance is highlighted by the Cinebench, X264 v5.0 encoding test and PCMark8 system benchmarks. With the same CPU the Asus board is far more powerful. When it comes to overclocking though there’s nothing between them. With the same i7 6800K sample I was able to hit 4.3GHz, with some multiplier and low-level voltage tweakery. It was no leveller of straight processor performance, however, as the X99 Deluxe was still able to top the Gigabyte’s overclocked Cinebench scores. 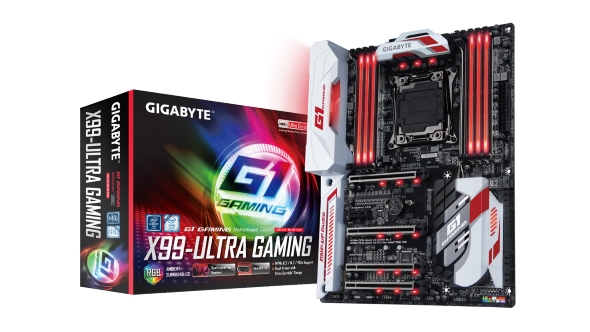 It’s not often you can accuse a motherboard of looking good, but against my better judgement I do have a soft spot for Gigabyte’s X99-Ultra Gaming. The white and red covers give it a clean finish and the myriad RGB LEDs serve to highlight the performance components inside your rig. With a see-through side panel and the motherboard’s LED hues matching the rest of your machine you can create quite the lightshow.

But that’s not all the Gigabyte X99-Ultra Gaming has to offer. It’s got a great feature set and the overclocking chops to match the best Asus can offer. Sure, it can’t deliver the straight line CPU performance of Asus’ top-end X99 board, but it has got it beat in terms of general gaming speeds. The Gigabyte board will help you get the most out of your graphics cards and, for us gaming-oriented folk, that’s pretty much all we care about.

If you were aiming to build yourself a serious server-class workstation then you’d be better off with the Asus X99 Deluxe, with its superior CPU and memory performance, but for gamers looking to create a multi-GPU super rig the X99-Ultra Gaming has a lot going for it.