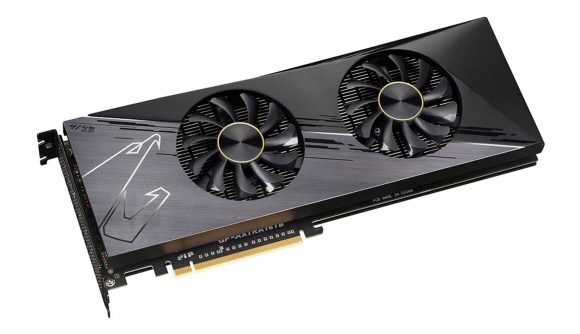 The best SSDs still sit around the 500GB or 1TB mark, but with the chonky size of games ever increasing, gamers will soon be in need of something bigger. Enter the Gigabyte Aorus Xtreme Gen 4, which might look like a graphics card with its full PCIe 4.0 x16 interface, but it’s very much an SSD that can house a whopping capacity of up to 32TB.

This high capacity is thanks to the NVMe slots behind its dual-fan design, capable of holding up to eight of Gigabyte’s own 4TB Aorus Gen 4 SSDs. The cooling solution also helps keep it close to its sequential read and write speeds of 28GB/s and 26.6GB/s respectively for as long as possible, while avoiding thermal throttling.

It’s not the first SSD we’ve seen with such a ridiculously high capacity, with Sabrent revealing its 64TB drive earlier this year. It’s unlikely you’ll be slotting this model into the best gaming PC any time soon, however, as most gaming motherboards only have a single PCIe 4.0 x16 slot.

Although Gigabyte hasn’t announced pricing for this drive, we’ll definitely be looking at a four-figure price tag, considering that a single 4TB NVMe Gen4 SSD costs around $800 alone.