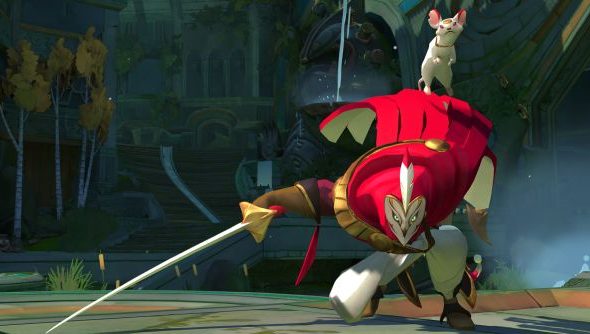 Yes, Gigantic is the MOBA-shooter with the bird-man, not the one with the angry monkey, the one from Bleszinski or the one in space. I tell you, you wait for a cross-pollination of two of your favourite genres for a few years and then…

Point is, Gigantic is also unique in that it’s the one you can play right now, if you’re lucky enough to get into the closed beta that kicks off today. You can sign up for a slot on the official site. You’ll need to pick between Windows 10 or Xbox One, so if you haven’t upgraded and don’t have the console, you’re out of luck. For now it’ll also only be running at weekends but is set to “expand to a broader testing schedule” later on. Developers Motiga will be patching between each phase, introducing new features as they go.

If you’re unfamiliar, Gigantic is 5vs5 first-person spell-casting and lane-pushing based in a lovely cartoon fantasy world. Each team is also paired with a massive guardian that serves as its own powerhouse but also the means of victory – if it goes down, you lose. Gigantic will have cross-platform support when it launches, which is still scoped out for some time this year, letting it get in ahead of its competitors. Naturally, it’ll be free to play.

Here’s the latest trailer, and there’s also a set of character introductions over on the YouTube channel.