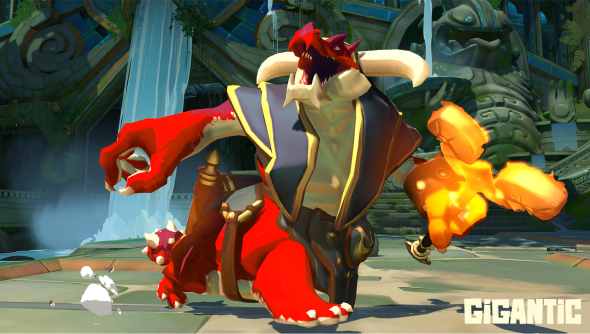 Dota sees you protecting an ancient tree from the enemy team. League of Legends? A crystal obelisk. Gigantic doesn’t bother with that guff, your job is fight in the coattails of a giant, rampaging monster.

Yes, it’s another MOBA but this one’s designed by James Phinney, creative director on Guild Wars and the lead designer of Starcraft.

Gigantic’s set to be a third-person MOBA, not unlike Super Monday Night Combat. Except, instead of a static ancient to defend at one end of the map, both teams fight alongside a gigantic (geddit) guardian which is capable of wiping out the other team’s players. The first team to kill the other team’s monster wins.

That third-person view lets the designers make much more vertical maps, as it’s difficult to convey terrain depth from a top-down perspective. So expect players to be rocket jumping around the map and finding new places to camp.

There are a number of different guardians in Gigantic, each with different attacks and abilities. As they march through the level they destroy parts of its geography, opening up new routes and locations for players.

You can summon creatures to defend points on the map. Each creature summoned provides your team with different bonuses – buffing your health, attack, or defence, for instance – and it also strengthens your guardian’s power. So, when your guardian and the other team’s meet they should both be hulking great beasts.

Developer Motiga are opening the European alpha servers on 17 December so it’s best to sign up soon if you’d like to get access. Follow that link to read more details, too. There’s a breakdown of 12 of the heroes you can play as.