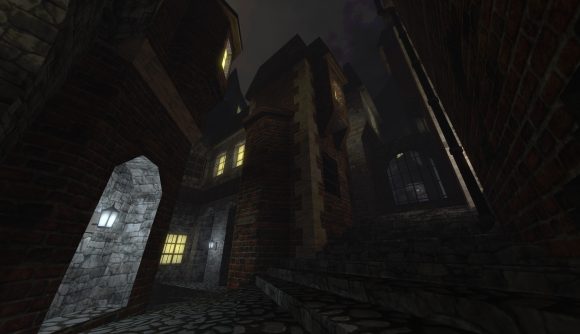 The Thief games, the first two in particular, are still some of the best stealth games around. Skulking in the shadows of a made-up historical city, preying on your targets using any number of strategies, they define so much of what makes the genre pleasing. Gloomwood is a new, horror-inflected take on the classic Thief formula from the developer of Dusk that’s a little less concerned about brevity.

The announcement trailer premiered during this year’s PC Gaming Show, giving a brief 90 second tour of the old-school, nineties visuals and gruesome encounters we can expect. The city is a neo-Victorian metropolis that’s been cursed, and you’re trapped inside, forcing you to tentatively find your way out of this doomed hellhole.

Although it looks like Thief, and shares a lot of the core principles, this has more survival horror elements, and your methods can be more indiscreet. The map is open-world, and you’ll have a wide arsenal to choose from, including a stealthy canesword, six-shot revolver, and a rope-slinging harpoon rifle. The main plague-mask wearing enemies in the trailer are presumably the crowmen, the Steam page promises “a mob of ghastly denizens”, so expect the creep factor dialed up on any Victorian neighbors.

Making Gloomwood alongside David Szymanski is Dillon Rogers, with New Blood publishing. An early build demo is available on Steam, and you can see the first trailer below:

Gloomwood wasn’t Szymanski’s only news either – his Quake-like FPS Dusk now has mod support. No release date for Gloomwood yet, but you can busy yourself with the best action-adventure games and best horror games if the demo wets your appetite.