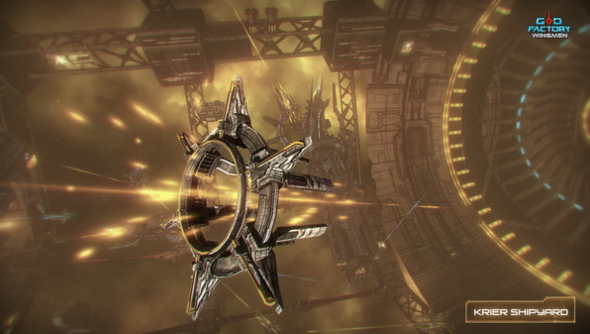 If you’ve been following Wingmen you’ll want to go into the fine details of this patch to see how the game’s been changed.

Firstly, those three new maps. Each map’s centred around a new mechanic, making them play differently from the others. For instance, when you capture a base in Magma it creates a danger zone around the station that’ll damage anyone caught within. Each capture locks down the map, narrowing the area for dogfights and intensifying the action. Shipyard is a map riddled with jump gates, allowing you to dodge about a map and mount surprise assaults on the other team.

Nine Dots Studio’s also added support for joysticks with more than 20 buttons so you can now customise your controller to contain all the actions you could possibly need. You can also mix and match devices, so you can use a joystick and pedals to fly your ship.

You’ll also be able to upgrade your ship more quickly, too, because Nine Dots now reward you with 1.5 times as many credits.

Wingmen’s colour scheme, which was already vibrant, has been made even more intense, to increase “visual diversity”.

I’ve copied in the full change log on the next page where you can read the great many changes to Wingmen’s items.

– In each map, there is a special gameplay feature:

– If you have a joystick with more than 20 buttons, they will all work, meaning that we should now support X-55 and X-52 Pro from Saitek, among other joystick models

– If you are using multiple devices to control your ship (Joystick + pedals for instance), it will now be supported as well

– Reconnection feature: If you are disconnected from a match, you will be able to join back.

– Radar indicators (arrows pointing toward ships around the HUD) size will vary depending on the distance of the target with the player. Meaning that a closer target will have a bigger arrow than a one that is further.

– The original map’s color design have also been changed to increase the game’s visual diversity from a map to another.

– Increased the amount of credits received after a match by 1.5 time.

– Changed the way ship descriptions are stored in the database, resulting in more characters authorized.

– The Resurgence switch was not working properly.

– A lot of weapons displayed wrong information about their Projectile Range being affected by the Targeting Range stat; they will now display the correct modified range in the advanced stats tab.

– Payload mines did x1.7 times their intended damage because of a problem related to the seeker mines system.

– Relentless trait that stay stuck activated even if the player stopped shooting.

– Bots not using some of their abilities.

– Concerted assault not working on Bluerose. (It was working fine on Leaderbeam)

– Many other more minor fixes.

– Chorion Augment Barrier Mark 1 to 3 was not working for client players.

– Focus target additional informations (just above the map) were not visible if in cockpit view.

– If shooting a missile in Alpha mode then switching before it hits its target, it will apply the current mode’s effects. Best example is the Chromatic, it will do Ignition damage even if player shot a Distortion projectile (and swtich before hiting its target).

– Trait name and description localisation not being updated if user change language.

– All Green and Red Alert trait conditions indicators (on the shield bar) are always visible, even if the player isn’t in the mode where they are active.

– Bots repawn time after death has been increased by 10 seconds (changed from 15 to 25 seconds).

– Shield Burst negative effect increased to 50% instead of 20%

– Changed all WCU progressions to increase the viability of early “Locking Speed” builds.

– All bombing weapons except the MiNi and the Lashing Star have been nerfed (both DPS & DPL). This affects Eagle, Blue Rose, GreenCOMET & Horizon.

– Guantri’s Species Abilities (Switches): Cooldowns were completely readjusted (generally increased) according to the fact the Guantris generally have a superior Cooldown stat.

– Guantri’s Wing Weapon Lashing Star: Its main projectile’s damage has been decreased, but the secondary projectiles are now more powerful. Ammunition was increased by 2 (from 7 to 9). Its smaller projectiles are now also Chain Attack, so they were brought back to 3 shots per second.

– Arblos Gunships now have lower Resistances, but proportionally more Shield, allowing them to take the same amount of punishment in a single run, but making the damage they receive “more permanent”. Their Shield Recharge stat has been rebalanced according to this (the gap between the lowest and highest Shield Recharge they could reach was too big).

– Now that mines’ detection range has been fixed, we realised they were too strong and too many could be laid, keeping in mind the speed gunships reach, combination of power when multiple ships had mines and the fact they were too hard to see made them too punishing: