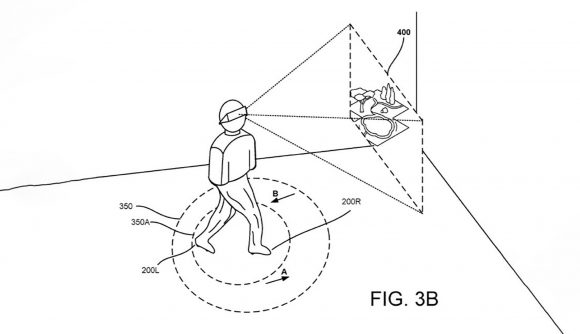 Google has applied for a patent in the US to attach wheels to VR shoes… stick with me here. The concept is a motorised shoe that would keep a user within safe boundaries during virtual reality play while, in theory, allowing you to walk freely within virtual worlds without ever worrying about walking into a wall or smashing your TV to pieces. In theory.

The concept missed April Fool’s Day by a whole month when it was initially filed, so let’s put that theory to rest. The patent application outlines a motorised device that will activate “when a distance between the motorised footwear and a boundary of an operational zone defined in the physical environment is less than or equal to a threshold distance.” Essentially, if you walk out of bounds, the shoes reel you back in. Capeesh?

The virtual reality community has long been wrestling with how to get gamers feet involved in the immersive experience. The traditional solution is to harness up and suspend a gamer, often over a reactive treadmill, allowing for full locomotion in-game. However, these are bulky, expensive, and almost everyone’s in accordance that there’s got to be a better way

Google’s response is a motorised roller skate to scoot you around virtual worlds without you unknowingly breaking everything or yourself in real life. It’s a play on the similar idea Cybershoes recently brought to the fore. Those of you familiar with VR will be aware of the boundary boxing headsets employ to prevent any unfortunate flailing accidents and the proposed shoe employs a similar concept. 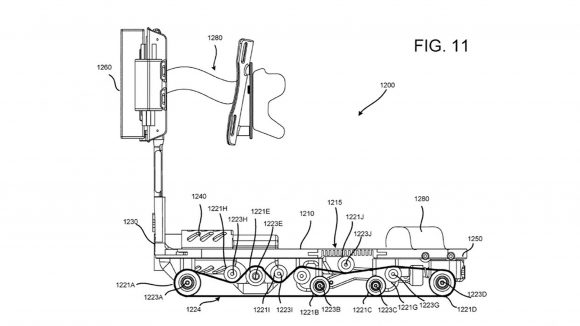 Essentially, a tracking sensor fitted somewhere in the environment or on the device itself will measure where the user is located within a predefined zone. Once a user walks past the threshold, or outer limits of the defined space, the shoe’s motor kicks in, moonwalking the user back to the relative safety of the play area.

The patent outlines various potential avenues for Google to explore in its VR venture. One diagram outlines a boot design that extends up the calf/shin to hold the power supply and transmission device, while another features a tank-like tyre track design that flexes at the upper foot for extremity dexterity.

You’ve got to love the ambition in the initial designs, but therein lies the issue. No matter how great the measures put in place to keep users upright and within the safety of their own homes, Murphy’s Law will be in full effect. Balancing out the retrograde motion of the shoes with the forward motion of the player is surely going to be a monumental task on its own. And then getting developers to implement it properly in their VR games/experiences without making people sick and/or making them fall flat on their face is going to be mighty tricky too.

The journey from patent application to on-the-shelf product isn’t going to be easy, nor is it guaranteed (or even likely) to actually occur. Google is really going to have to put some hours in to make this one work.