Tony Hawk’s Pro Chainsaw Cat is not a real game. If, like us, you think it absolutely should be, Gori: Cuddly Carnage is here to save to the day. And by ‘save the day’, we mean ‘brutally shred piles of cuddly unicorns’ like a frustrated dad who left it until Christmas Eve to go out and buy presents. Also, dad’s a cat with a hoverboard. Also, the unicorns have chitinous mandibles for arms. Videogames are the best.

That hoverboard, by the way, is the core of Gori’s frenetic skater meets hack n’ slash combat. The game combines the environmental traversal of your favourite Tony Hawk game – airtime, speed, and grinding – with the immediate, cathartic joy of hyperactive violence. Throw in neon-splashed cities and chug-happy mega-bastard guitars, and… actually, yes, this is exactly what we imagine most pet cats get up to at night.

Because we’re just as enthusiastic about stuffed animal murder as anyone else, we spoke to John Kalderon – CEO and designer at Angry Demon Studio – about the challenges the team faced in creating the game’s fluid, fast-paced combat, and how Unreal Engine helped get Gori’s hoverboard off the ground.

“The feel of combining cuteness with over-the-top violence and horror is just something that appealed to us all,” Kalderon says. “We are horror developers from the start, and it just tickled that part of our creative spirits.” 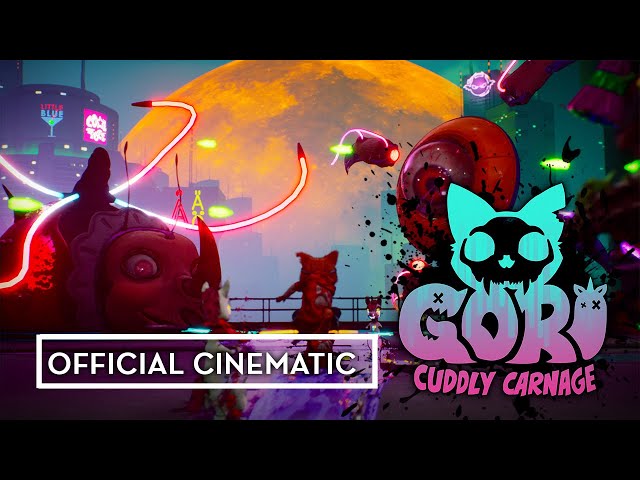 For Angry Demon, getting an exciting central mechanic in place was the most important step.

With our movement, players can grind on rails while also slashing the hell out of disfigured and creepy toys

“We wanted to make a game based on a game mechanic we thought was fun, and that’s where the hoverboarding combat became reality. It helped us create a hybrid between a skating game and a hack-and-slash game.” Those two design pillars – movement and combat – became the core of Gori.

“With movement, the player can race around really fast, grind on rails, and do big jumps while doing cool (and deadly) tricks, while also slashing and bashing the living hell out of disfigured and creepy toys. In short, it has helped bring really fast movement and airtime to regular fast-paced combat mechanics.”

With these key systems in place, the team were free to riff on their personal passions and development experience, iterating ideas until Gori’s style and characters began to take shape. 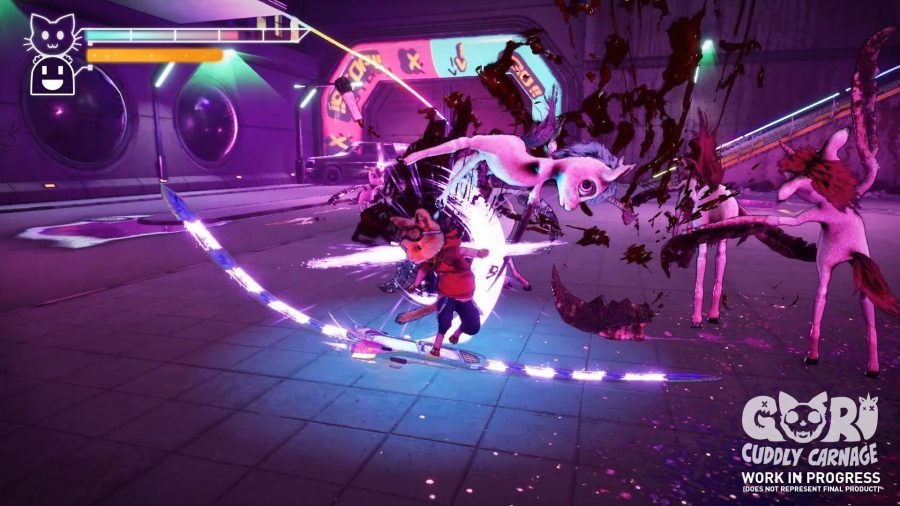 “As we developed on the [skating and combat] mechanic, we also started devising a story. This is how a lot of the characters came to be. One thing that was amazing during the creation was that we just laughed a lot and had a lot of fun. No idea was too crazy, and we handled everything a lot different from making our previous horror games.”

Many of the more creative design choices, Kalderon says, arose from practical necessity.

“Sometimes an issue arose like ‘How do we spawn characters?’ For this, we came up with the teleporter-Gacha-balls. So Gori slowly grew into what it is today, since we just unleashed all our creativity without limitations. Things like Happy Tree Friends, Alice: Madness Returns, Don’t Hug Me I’m Scared. They’re all awesome, and the chance to make our own thing within that kind of world is incredibly intriguing. Also… we love cats. And unicorns.”

With the design work evolving, the process of getting the whole ‘doing violence to cuddly unicorns on a hoverboard’ thing to feel as good as it should was the next challenge. Physics, collision detection, and haptic feel were all major focuses. 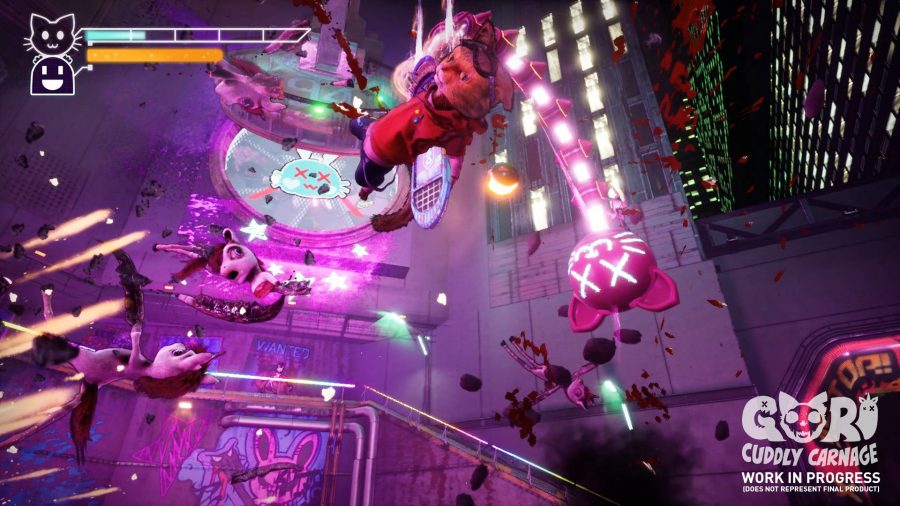 “There have been a lot of challenges trying to combine the hoverboard with combat, and we’ve overcome a lot of these for the alpha demo. Physics and collision detection were technical challenges, since everything moves so fast. However, the technical challenges are small in comparison to the more design- and feel-related issues, since the gameplay is so experimental.”

Here, Kalderon says, two things were key. The first is community support – “we’ve gotten awesome feedback from our community” – and the second is Unreal Engine 4.

“The main technical challenge was getting the board to feel great to use and to make combat a joy. Unreal Engine really helped us with its graphical interface, which means a designer doesn’t have to hang over the shoulder of a programmer to get the gameplay right. The programmer can easily create systems which are ‘designer-friendly’ to help push the gameplay to great quality without having the issue of excessive tweaking.”

Working in the Unreal Engine, Kalderon says, helps the team at Angry Demon Studio “achieve our creative vision with ease.” 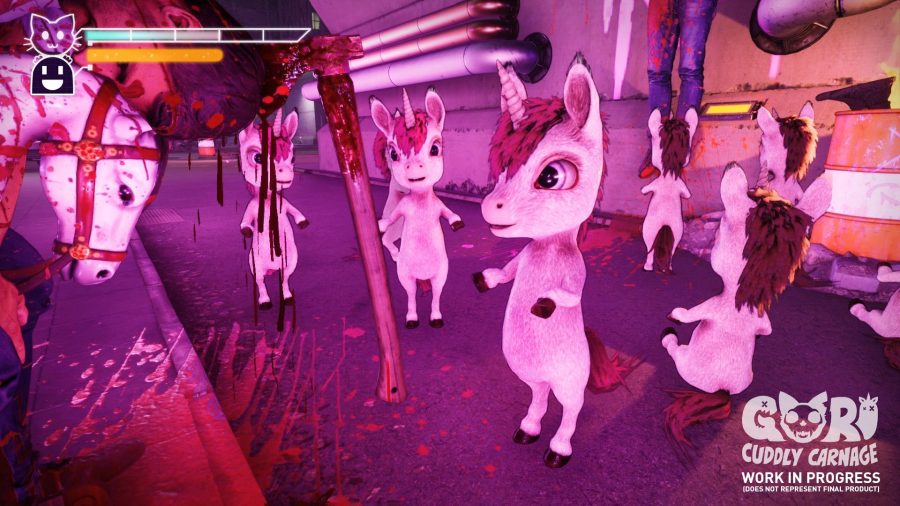 “The level of graphical fidelity that we can easily achieve, through node-based shader programming and awesome animation tools, is just astounding. The user interface is extremely helpful since each and every senior individual on Angry Demon Studio can create and implement their own work. 3D can implement and do shader programming, animation can implement the animation and create their own animation blueprints with ease, and sound and music can take their work from ideas to finished product by themselves.”

Outside of the “pure joy” of using the Unreal Engine, Kalderon says, the community of both users and Epic staff are a huge asset.

“We receive so much help from the user-based community through forums and it helps us solve a lot of technical issues. On the other front we have Epic, that helps us with events like Epic Presents, visibility, the Unreal marketplace, and the amazing Epic Mega Grant which can really make a big difference to an indie team.” 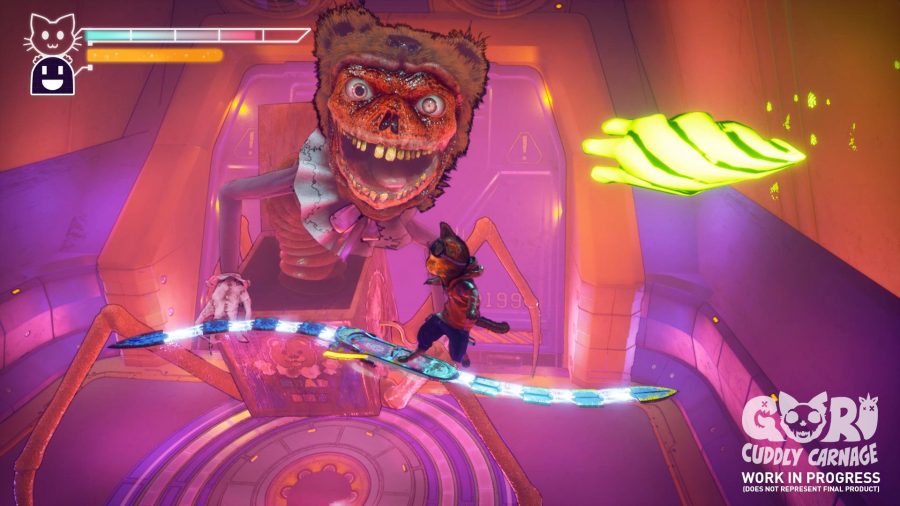 Gori: Cuddly Carnage releases “as soon as the unicorns allow it.” No, really, that’s the official release date. Until that fateful day comes you can download a free demo from the Steam page. Unreal Engine 4 is now free. Unreal Engine 5 is due to release next year.

In this sponsored series, we’re looking at how game developers are taking advantage of Unreal Engine 4 to create a new generation of PC games. With thanks to Epic Games and Angry Demon Studio.