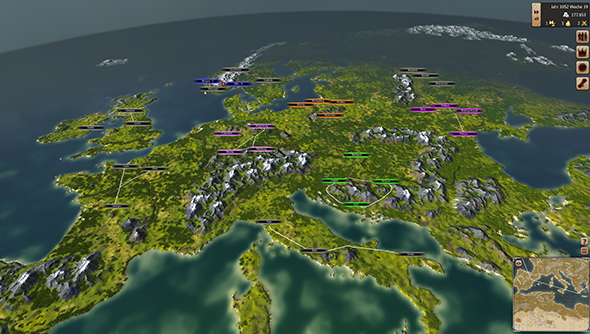 Grand Ages: Medieval was announced way back in August at Gamescom, and is so much to do with floating over fields and clicking on tiny men that you might have forgotten it ever existed.

It’s a real time strategy sequel to the similarly grand aged Grand Ages: Rome, and comes from the developers of Rise of Venice and Patrician IV, so you know it’s got some nation-management chops. A man played it in front of me for a little while, and here’s what happened.

A medieval city builder that encompasses 30 million square kilometres of European continent, Grand Ages: Medieval shrinks the old world down to a manageable tabletop of mountain ranges and forests and lakes and rivers. You can zoom in and out to reveal details of cities and settlements, or sit on top of the Alps and peer out over the sea to Great Britain. It’s like being a tiny medieval god, or owning an anachronistic blimp. 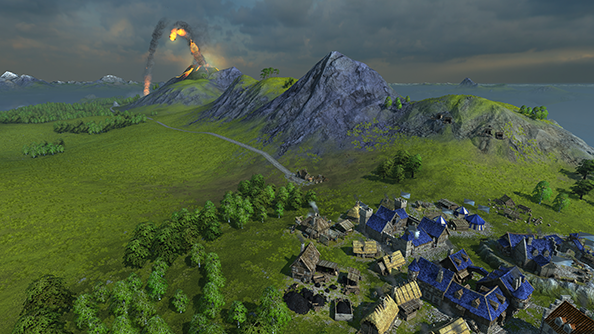 You’ve got your towns to look after, and they all produce and consume goods and generate wealth. There are 20 kinds of goods in the game and they’re all fully economically simulated. Which is to say that you can trace an egg in Berlin all the way back to a chicken in Paris, or moreover that the pressures of supply and demand across borders are real and fluctuate according to measurable quantities of goods sloshing about between states.

Each town can manage to produce a maximum of five foods, with higher end goods requiring an inflow of the more basic types of materials. Stringing together a production chain between your towns is generally how you create technologies of higher value, and this is accomplished by having automated merchants lugging wagons along roads of your own designing. By upgrading roads you provide them with an easier, safer and faster journey. And by being nice to your neighbours you enable free trade between your nations. 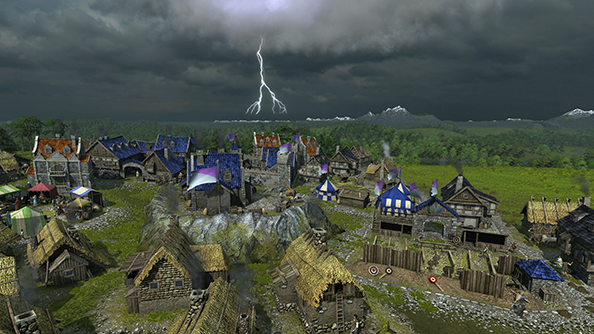 Expansion is achieved through diplomacy or military might. Convince a nearby town that you’re the coolest king in all of Europe and they’ll happily swap their own flag for yours. Otherwise you can storm about the map with a number of army units in an attempt to strongarm your way to success: something that’s metered by a harsh fatigue system and the huge resource demand that a standing army requires.

Throughout your reign you’ll contend with all of the annoyances medieval empires had to endure at the time: the black death, famines, earthquakes, storms and, yes, volcanoes. These natural disasters murder populations, disrupt production and can collapse economies with their burning hot lava flows, often with little to no regard for historical accuracy. It’s a safe enough bet to assume only a few unfortunately located civilisations will have to worry about death by magma.

Grand Ages: Medieval is set for a 2015 release, by which time the medieval era will be even more historic than it is now.