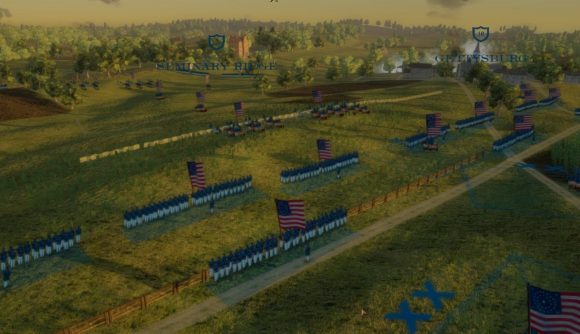 The latest patch for historic strategy game Grand Tactician: The Civil War gives the AI a brain boost, both in the way it handles tactical battlefield command and its approach to the grand campaign. It’s a “wagonload of AI,” as the developers have described it, and it should make for more challenging, interesting campaigns going forward.

As strategy editor Joe Robinson noted in his impressions on Grand Tactician, the AI can feel a bit befuddled at times, both on the battlefield and in the war planning department. Version 1.04, which is out now, addresses some of these issues with more intelligent AI recruiting and troop assignments. The enemy general will now send reinforcements to areas under threat a bit more aggressively, and it’ll do more fleet construction too – so keep a close eye on your coasts, because the enemy will be watching for areas that are poorly guarded.

During battles, expect to see more initial artillery bombardment while the AI waits for its reinforcements to arrive and form up. It will order troops to advance more often, and do a better job of waiting for everyone to get into position before actually committing to an attack. It should also do a better job of keeping its commander units a safe distance from engagements and enemy units in general.

The patch notes include all the specifics on fixes and tweaks added in the latest update, so check those out if there’s a particular issue that’s been getting in your way.