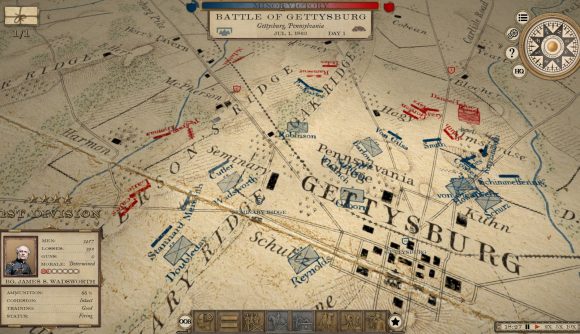 Grand Tactician: The Civil War (1861-1865) is a grand strategy game that’s just had its first anniversary of entering Early Access on Steam. To celebrate the occasion, developer Oliver Keppelmüller has announced that the massively ambitious game will be leaving Early Access next month, with its 1.0 update set for September 24.

In the grand campaign, you’ll most likely be fighting ahistorical battles, and Grand Tactician 1.0 will have more than double the number of maps for these to play out on. Keppelmüller says the full game will also have more than 1,500 historical commanders in its roster of officers to place in command of your formations and armies, and it also reflects a host of performance and stability improvements, gameplay balancing changes, better battle and campaign AI, and a period-themed user interface that’s scalable for big screens (and tired eyeballs).

Keppelmüller says there’s plenty to look forward to after Grand Tactician’s release date, too. Rare weapons, such as the Gatling gun, coffee mill gun, and one-pounder Williams gun will be added in a post-launch update, as well as the option to build government-subsidised industries in territories you control.

More battle maps, a custom avatar creator, and graphical enhancements are planned in the post-launch roadmap as well.

If you’re interested in the American Civil War, Grand Tactician is about as comprehensive a simulation of the conflict as you could hope for, with real-time tactical battles playing out on a campaign map that encompasses the entire United States, circa 1861. Now’s the time to jump in, too – once the 1.0 release arrives, the price will be going up by 10%.