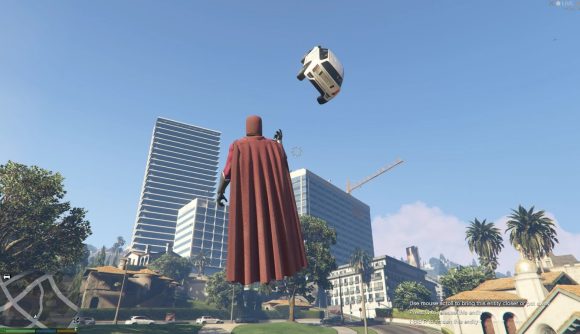 Given Grand Theft Auto’s long-standing antipathy toward human beings in general, X-Men nemesis Magneto is a perfect fit for Los Santos. One enterprising modder has added Magneto to Grand Theft Auto V, allowing players to take on the powers of elemental magnetism.

As Magneto, you can casually fly over the city, plucking cars up off the roads and chucking them into each other. But the mod gives you a startling amount of Magneto’s power – you can rip weapons out of enemies’ hands, pull up street signs and use them as javelins, yank airplanes and helicopters out of the sky, and even swing huge wind turbines around.

It gets even more ridiculous, though: Magneto can actually attach vehicles to the blades of a massive wind turbine and use the entire works to smash things. Guns yanked out of police officers’ hands can be turned around and fired back at them. He can lift entire trains off their tracks and whip them around through the air, and pull gas pumps away from their stations.

The Magneto script mod for GTA5 was created by JulioNIB, a prolific modder who has also made script mods that put Dragon Ball Z characters, Thanos, and Watch Dogs-style hacks into Grand Theft Auto.

To download the Magneto script mod, head over to his site, GTAXscripting. You’ll need the latest version of Scripthook V .NET for it to work, and Julio has put together some installation instructions here.

This is one of the more impressive superhero (well, super villain, arguably) mods I’ve seen so far, so it’s definitely worth a look. The way planes and helicopters just zip toward the character when he takes control of them looks top notch. For more overhauls to GTA 5 gameplay, see our list of the best GTA 5 mods.