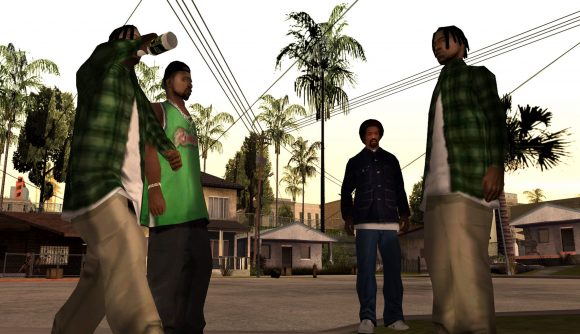 July 27, 2020 The fan-made trailer has been taken down following a copyright claim from Rockstar’s parent company Take-Two Interactive

The creator of the fan-made trailer, Arcadia Squad, has updated the community section of its YouTube channel to explain the disappearance of the video.

Original story follows: We’re currently in an era of remakes and remasters, from larger-scale recreations like Resident Evil 2 to graphical tweaks like Final Fantasy 8 (you know, the one that’s not quite as good as 7). You’ve likely heard the news that GTA 5 is making the jump to next-gen, but what would Grand Theft Auto San Andreas look like if it did the same?

Three fans have given us a slight glimpse of what that could look like by creating a trailer for GTA 4 in Unreal Engine 4. The group is called ArcadiaSquad and consists of members from Argentina, Colombia, and Chile. They note on their YouTube channel that they are not recreating the game – sorry – and are focusing on providing perspectives of what old and iconic games would look like with a bit of TLC.

The trailer itself is fun and is stuffed with throwbacks, as you can imagine. The most iconic image that jumped at me was a shot of protagonist CJ’s house.

While we don’t have a Grand Theft Auto San Andreas remaster, we can still use GTA 5 mods to turn it into whatever we like. Someone has already released a mod that changes Grand Theft Auto 5 into Vice City.

If you’re curious about what games you actually can play in the future, then we have an upcoming PC games feature that lets you know just that. If you don’t want to wait at all, then we also have a new PC games of 2020 list so that you can dive right in.