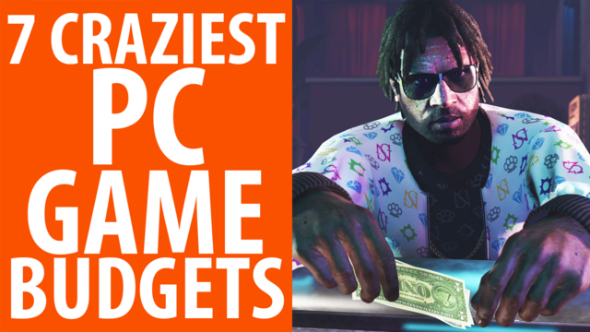 Money makes the world go round. That’s not actually true, and before you ask it’s not love either: it’s conservation of angular momentum, obviously. The PC gaming scene, as it happens, does require quite a hefty sum of cash dollar to keep its myriad cogs, levers and cranks churning away. Exactly where that money goes? We’ll never know for sure. But what we do know is that if you’re going to spend upwards of $50 million on a game, you should probably come up with a catchier name than Huxley. It’s a triple-A MMO, not a German wirehaired pointer with a bespoke Barbour coat.

Like your gaming a little more modest? Check out the best PC indie games.

That’s right, we’re counting down some of the most ludicrous budgets in PC gaming history – much as it makes our eyes water and the contents of our wallets quiver in fear. You’ll probably be able to guess a couple of these titles, but be prepared to weep a little for humanity when you find out just how much money is estimated to have been spent on marketing. Spoiler alert: it’s much, much more than the cost of developing the game itself – you know, the bit you actually pay for.

If you liked that and want more funnies, lists, news and impressions in video form, go ahead and subscribe to PCGamesN on YouTube.