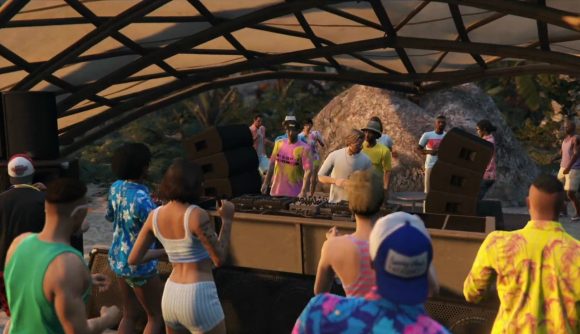 If you’re going to steal stuff, it might as well be from a big-time drug trafficker who spends his off-duty hours organising vacuous beach dance parties, right? That’s what you’ll be doing in The Cayo Perico Heist, the biggest-ever Grand Theft Auto Online adventure that’s due out December 15. A new trailer is out today that shows off some of the sheer scale of this new caper.

The backdrop for the multiplayer game’s heist is of course the island of Cayo Perico itself, which is home to El Rubio – a global-scale narcotics trafficker with ties to the Madrazo family. El Rubio also likes to throw Fyre Festival style dance parties, flying in jet setters and influencers from around the world to groove to music by talented musicians and DJs.

Unlike the Fyre Festival, however, El Rubio actually has the finances to make this work, and that’s what you’ll be after in this adventure. There’s an “untold fortunet in art, gold, and drug money scattered across the island”, Rockstar says, and it’s protected by heavily armed guards and advanced security systems.

Fortunately, a high-profile score like this demands the biggest and baddest in heist technology, and at your disposal is an actual submarine equipped with torpedoes and surface-to-air guided missiles, the better to knock pesky helicopters out of the sky.

You’ll be able to play The Cayo Perico Heist when it launches December 15.