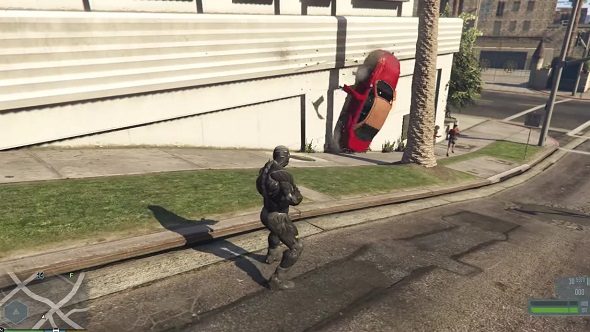 A talented modder has put the nanosuit from Crysis into GTA V, where it joins hosts of other mods that add everything from superheroes to supervillains. This one’s pretty special though, since it also brings loads of little quirks from Crysis along with it.

Cause even more chaos in our list of the best sandbox games.

The Crysis script mod was created by JulioNIB, and it brings the suit and all its powers into Los Santos. Hell, it even brings the flipping UI.

You can whip out your gun, head into first-person and toggle weapon attachments on and off, just like you can in Crytek’s sci-fi shooter. You can even use your visor to tag NPCs, marking your targets.

Obviously the main function of the nanosuit is also replicated: the powers. Soak up bullets with maximum armour; go invisible with the cloaking device; run fast with super speed; and trigger maximum strength to punch cars at people or throw NPCs through windows.

There is a downside of bringing the suit across exactly as it is in Crysis, though – you can only use each power mode for a few seconds. Honestly, it’s like it’s powered by home-brand Lidl batteries. Have a watch in the video above.