Want to know where to find all the new Cayo Perico Heist weapons? GTA Online’s third update in 2020 is probably its biggest of the year, as you travel to a new tropical island to pinch a bunch of stuff from an incredibly wealthy drug cartel.

This update includes a few new weapons, one of which you have access to straight away, but the other two require a bit more work in order to use them. You will first need to know how to start the GTA Cayo Perico Heist, but once you do, you’ll not only get access to one of the guns, but also the new vehicles, too!

Our guide to all the new Cayo Perico Heist weapons will go over the upgrades available for the military rifle, when you can unlock the combat shotgun, and hints for everything we know about the extremely well hidden Perico Pistol. It’s going to be quite the treasure hunt to find this golden gun, so we hope you’ve prepared by making money in GTA and saving up for the trip.

How to unlock every weapon in the Cayo Perico Heist

There are three Cayo Perico Heist weapons in total, and while the military rifle is very easy to come by, the other two will take some extra work. 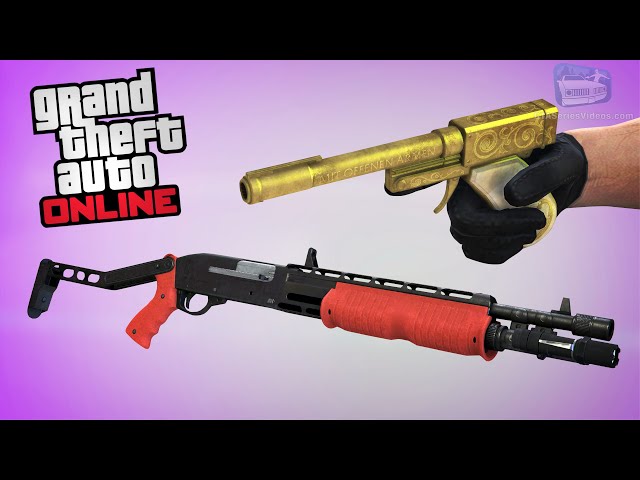 To find the Perico Pistol, you will first need to retrieve a small key from one of the guards sleeping outside bars and nightclubs in Los Santos. They can be found on any type of session and are marked with a blue dot. We recommend that you head to one of these eight locations and switch between the lobbies until they spawn:

After finding the key, you can head back the Heist and unlock the drawer in El Rubio’s office (it’s the grand room with the big desk) to find the pistol. It’s the room you need to enter before you descend into the underground vault. This will unlock every upgrade at Ammu-Nation.

Since you’re able to buy the military rifle right at the beginning of the DLC, the full list of upgrades can be found below:

After finding the Combat Shotgun at the compound, head to the Ammu-Nation to find the upgrades:

After finding the Perico Pistol, you’ll be able to repurchase and stock up on ammo at Ammu-Nation: