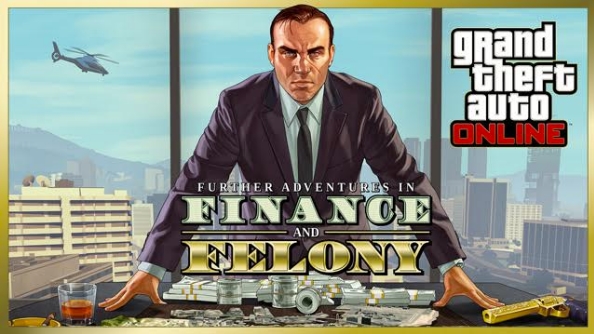 There have been numerous updates to Grand Theft Auto V’s online multiplayer over the year, but few have offered quite the scale of Further Adventures in Finance and Felony. Taking on the role of CEO of a trading empire, you’ll be conducting missions with your crew to ensure the successful buying, selling, and shipping of illegal goods.

Go crazy in the best sandbox games on PC.

Starting with the purchase of an executive suite equipped with a boardroom, helipad, gun locker and full-time assistant, players can become a CEO and access special missions. With use of the SecuroServ Special Cargo Network, you can invest in warehouses and manage the trafficking of ‘exotic’ product throughout Los Santos. It’s all about playing the market: buy cheap, sell expensive.

Buy and Sell cargo missions will see jobs of three different categories undertaken to acquire crates of contraband, and the risky manoeuvres required to sell it on. Standing in your way will be the FIB, the SLPD, and even other rival players.

Your warehouses can come under attack too, and defence missions will see you holding off those who want to destroy your precious stock.

If that wasn’t enough, the update comes with the traditional GTA addition of new vehicles. You’ll be able to get behind the wheel of the HVY Brickade, Bravado Rumpo Custom, Pegassi Reaper, Vapid FMJ, Grotti Bestia GTS, Enus Windsor Drop, Buckingham Nimbus, Volatus, and the Tug.

New weapon attachments will be available from your local Ammu-Nation, and previously VIP-only attire will now be available for commoners from highstreet Los Santos shops.

Talking of Ammu-Nation, 25% discount on a huge range of in-game items will be available between June 7-13, and just logging into the game will nab you the pastel green pajama and pastel green smoking jacket. The Buzzard Attack Chopper will also be 25% off, and services from Lester and Merryweather Security will be going cheap too.

The Further Adventures in Finance and Felony update is available now for GTA Online. Just log in to get started.