Update 12 Feb, 2016: Rockstar have revealed details of the new Adversary Mode in GTA Online’s newest Valentine’s-inspired Be My Valentine update.

Till Death Do Us Part will take place in five different “romantic locations” and will allow up to four pairs of partner teams to play in the “ultimate GTA Online quadruple date.”

The biggest quid pro quo on this date, however, is that each couple must share one life between them, meaning if one half cops it the survivor is forced to take their own life in “dramatic fashion.” How’s that for an for an everlasting bond/ball ‘n’ chain? Those who do manage to stick together will be rewarded with some sort of symbiotic health regeneration.

While playing in Till Death Do Us Part, players will accumulate double money and RP by joining the event’s Playlist. Complete the entire thing and you’ll unlock a Firework Launcher, complete with fireworks, of course, and by simply riding together by car – which could be in one of the update’s Albany Roosevelt Valor limousines – or by arm wrestling one another, your RP rank will increase doubly fast.

To top things off, all SMG ammo will be half-price until the update ends – which is good news for those of you planning on picking up the Gusenberg Sweeper.

“You’ll either be skipping away down Lover’s Lane, or laying like lovers slain,” says Rockstar of the new Adversary Mode. Full details of the update, including contests and other bonuses, can be found on the Rockstar Newswire.

GTA Online’s Be My Valentine update runs until Thursday, February 18. If you’re planning on diving in, let us know how you get on. 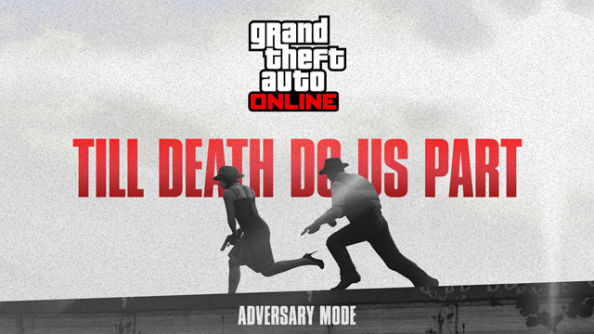 Original Story 10 Feb, 2016: While the romantics out there will be heading to fancy restaurants, spending overnights in plush hotels and indulging in general sycophantic behaviour this Valentine’s Day, Grand Theft Auto Online would rather you spent Cupid’s busiest shift with it. Be My Valentine is a free update that comes with new cars, new outfits and a new game mode that’s out now.

Yeah, why indulge in over-priced perfume and confectionaries when you can splash out on an Albany Roosevelt Valor limousine from your local in-game Legendary Motorsport?

Likewise, why bother with oysters and red roses when you’re just as able to snap up a range of new suits, vests, dresses, bustiers, boxer shorts, and stockings, among other things and look fly as hell as you strut around Los Santos.

Hell, why not even vouch for a Gusenberg Sweeper machine gun if you’re passing an Ammu-Nation? Then you can really paint the town red.

If all that’s your cup of tea (or glass of over-priced champagne?), Be My Valentine’s “couples-based” Till Death Do Us Part game mode that arrives on Friday might just make your weekend. As for what the new Adversary Mode actually entails, I’ve no idea. Rockstar reckon we should keep an eye on their Newswire between now and then, though.

The latest GTA Online update is available now, with Till Death Do Us Part arrives due at the end of the working week. Here is but the briefest of snippets: