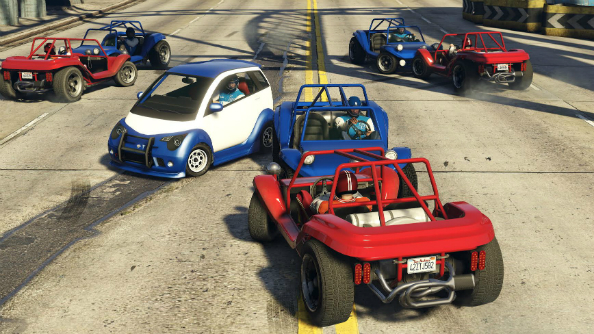 Getting in on the Thanksgiving week spirit, Rockstar is today releasing a new Adversary mode for GTA Online that’s inspired by the most American of all the footballs. Said mode is called “Running Back” and involves NFL-style shenanigans as two teams of high speed cars indulge in a large helping of vehicular violence.

Has all this talk of San Andreas-set chaos got you excited? Then read up on the best GTA 5 mods.

The new match type joins the permanent roster of GTA Online Adversary modes, and already has me semi-baffled, seeing as I know literally nothing about American football.

According to Rockstar’s press release, two teams of 4-8 players start off on opposing sides of the road, with one side challenged to protect their precious Runner, and the other attempting to send the selected wheelman into oblivion.

On the attacking team, the Runner is put in a swanky Benefactor Panto (you’ve got to love those Rockstar naming conventions), and must get to the end zone while their teammates try to protect their charge for the finish in BF Biftas. The defensive side, meanwhile, is tasked with blocking the Runner’s sprint, and must block, ram and total their foes while also driving Biftas. Make sense?

Anyway, Rockstar will be broadcasting all this car chaos via their official Twitch and YouTube channels later today. As a man who’s played 68 hours of GTA 5 (and not a single second in GTA Online), I’ll probably give this new mode a pass. Still, it sounds like semi-stressful/properly frantic addition.