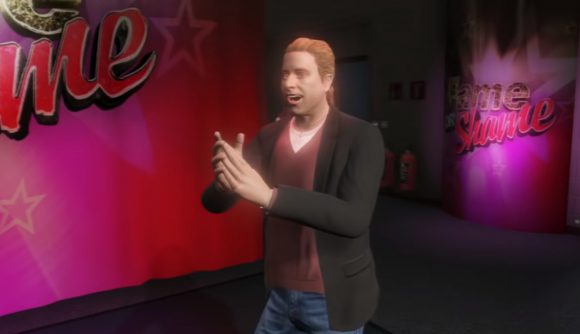 Rockstar veteran Lazlow Jones has parted ways with the Grand Theft Auto developer after a 19-year stay with the company. While Jones served as a writer, director, and producer during his tenure, he became better known for popping up in-game. Jones started as the radio host for GTA 3’s Chatterbox FM and finished up in Grand Theft Auto V as the host of a talent show called Fame or Shame. He also helped out with other Rockstar titles such as Red Dead Redemption 2.

Jones hinted at the departure in an Instagram post where he explains that being the primary caregiver for his sister had become “radically difficult” due to the pandemic. As pointed out by GTAMen, however, if you check Jones’ Linkedin, you’ll see confirmation that he stopped working at Rockstar in April 2020, and has future projects planned in games and TV.

“I am currently working on several projects,” he writes on Linkedin, “including development of shows for Disney and Netflix, consulting for a video game company and collaborating with a writer/director from Comedy Central and an Emmy winning producer and director formerly of Dreamworks.”

Lazlow joins Dan Houser in being one of the more experienced figures to leave Rockstar over the past year. Houser initially took an extended break in spring of 2019 and left the company March 11, 2020.

“We are extremely grateful for his contributions,” Rockstar says in an SEC filing. “Rockstar Games has built some of the most critically acclaimed and commercially successful game worlds, a global community of passionate fans and an incredibly talented team, which remains focused on current and future projects.”

News on Grand Theft Auto 6 remains elusive, but GTA Online continues to receive a steady stream of updates alongside Red Dead Online. The former is due for its “biggest update ever” later this year, while the latter recently got its Naturalist update.