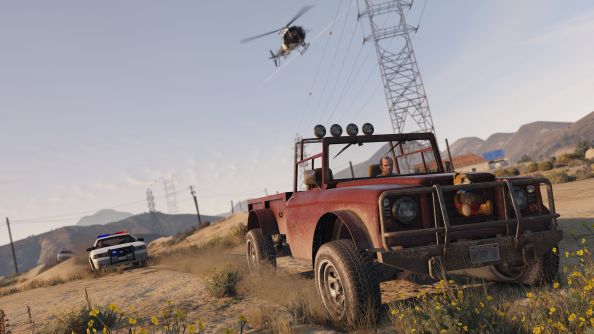 Grand Theft Auto V can get a bit aimless once you’ve finished up story mode. Fun, sure – you’re still driving around and blowing things up – but without a bit of structure or goals to pursue, the shine wears off pretty quickly. Complex Control, created by THEAETIK, is a mod that gives you exactly that, borrowing from roguelikes and battle royale modes to keep you busy, but without having to connect to online servers.

GTA V is on our list of the best sandbox games you can play on PC.

You’ll start with a character who gets a vehicle and loadout, and then set out into environs of the greater Los Santos area. There, you’ll collect loot, but the battle royale influence quickly becomes clear as AI characters begin parachuting in. Their goal is to kill you, so you’ll want to eliminate them first.

The idea is to last until an exit zone unlocks, at which time you’ll be able to win the run and save your progress. The mod gives you persistent progression, and you can unlock skills, including a very handy Dishonored-like “blink” ability and one that spawns two guard huskies, which you’ll be able to use on subsequent runs.

That’s until your character gets eliminated, though. Complex Control also features permadeath, so once a character’s dead, they’re dead for good.

You can find the rest of the instructions for installing and using Complex Control at the GTA V mods page.

As always with GTA V mods, use at your own risk.