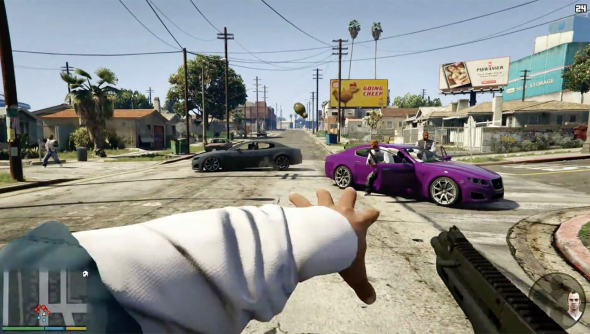 GTA V is getting a first-person mode in its transition to PC but that’s unlikely to lead to virtual reality support, at least if the game’s publisher is to be believed.

Some clever clogs figured it out, and now it’s among the best VR games on PC.

Take-Two’s CEO Strauss Zelnick says his company won’t be jumping onto VR development until they see “how the headsets roll out” and how they can “best deliver an experience.”

Speaking to Bloomberg TV, Zelnick was asked if the industry was ready for VR. “Not yet,” was his answer. “Part of it is we need to see how the headsets roll out and how we can best deliver an experience.”

One of his current concerns is the problem of nausea: “You’ll play our games for a long period of time — we don’t want people getting nauseated.” There’s also the issue of comfort, “I’m not sure how long you want an immersive headset on your head.”

After the Oculus Rift hits the market Zelnick assures us that they’ll “Find out” if their games will work with the headset and “If that’s what consumers want, we’ll be first in line to give it to them.”

Despite that, he said he’s in no rush to be the innovator in the field. “We see no reason to innovate in terms of business models. We prefer to be a fast follower. No one else can make our intellectual property — only we can. I’m happy to have other people spend loads of dough on R&D.”

So, Take-Two will be first in line to deliver VR to players so long as that’s a line made up of companies who aren’t early adopters or innovators.

And, thankfully, we’ve modders to provide VR to games when developers and publishers fall short.