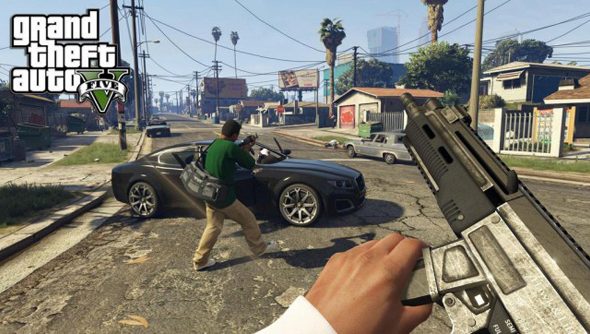 In a list of uncomfortable places to be, ‘inside the skull of Trevor Philips’ would probably place pretty highly. But first-person Grand Theft Auto was a terribly compelling idea when modders first started fiddling with it in Liberty City, and it’s even more so now Rockstar are officially supporting it for GTA V’s PC port.

Early footage of the mode sees Rockstar’s latest prove itself as an unlikely FPS, racing sim and flight simulator – and all in its own inimitable style.

My goodness. That may have been a series of well-choreographed demos, conducted around deliberately-placed chicanery. But gosh, wasn’t it good.

In case you were wondering, the game’s multi-purpose mobile will appear in the player’s hand while in first-person. Hopefully that’ll lead to Far Cry 2 flashbacks – looking up from your phone to discover you’ve driven your buggy into a swamp.

It looks like Rockstar have rather stolen Criterion’s thunder in the first-person extreme sports market. Helmets will restrict vision a tad, and around 3000 new animations have been added for close-up.

It’s the stuff not shown in this trailer I’m most excited to see enhanced, though – the quiet, ambient moments enjoyed in the muckier corners of Los Santos as the sun rises. How about you?