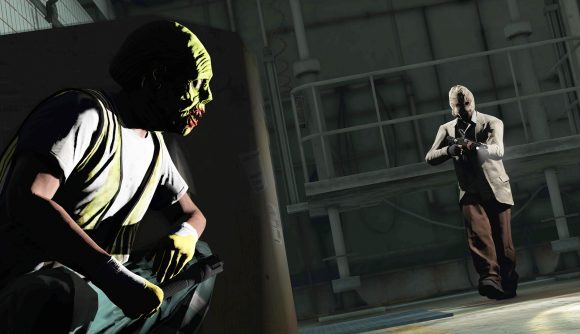 Spooky season is rumbling on in Los Santos, and GTA Online‘s weekly update is keeping things ticking along this week. We got the Halloween update seven days ago, but that doesn’t mean the content is drying up.

Players have been poking around for the new content and posting their findings on Twitter and Reddit. One of the standout additions this week is a new, alien-themed Business Battle. You can only do this at night, though, because things are notably less spooky during the day, obviously. If you’ve been out the loop, Business Battles are free mode events that involve players trying to nab cargo for their warehouses. They arrived as part of the After Hours update before being expanded upon in the Los Santos Summer Special update.

You’ll also find double the rewards on Business Battles in general alongside alien Survivals and Halloween modes. There’s plenty of content still in play from last week, too, such as Peyote Plants and general Halloween-themed goodies. So you can still go out and have some trippy fun. The GTA 5 podium vehicle has also swapped around, as it does, and is now the Fränken Stange.

If you’re looking at buying some cars this week, you can get 50% off the Nightmare Brutus, Cerberus, Imperator, Scarab, and ZR380. Facilities are also 40% off if that takes your fancy.

Rockstar hasn’t released the official notes yet, but you can find them below from dataminer Tez2.

If you’re looking to take a break from the spooks, our GTA 5 mods and GTA 5 cheats guides will give you plenty of inspiration for offline adventures.