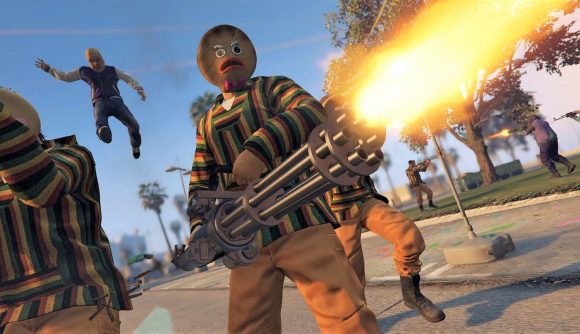 It’s the first Thursday of 2022, which means the first of this year’s GTA Online weekly updates is here. As ever, we’ve got a good idea of what it brings courtesy of fans who have taken a look ahead of Rockstar Games’ newswire post later today, and this week offers bonus rewards on a smattering of different modes and missions, as well a new round of discounts.

First up, the latest weekly update is offering triple the usual GTA$ and RP on the Power Play adversary mode, as Tez2 notes on Twitter. In case you need a refresher, this is the deathmatch-like “turbocharged showdown between two teams”, as per its description, which has players grabbing power-ups with zany effects to gain the edge over the other team. Preparations for the VIP Contracts, meanwhile, are offering double the regular rewards, along with the Nightlife Leak mission and Specialist+ level contracts.

There’s a new vehicle joining the game this week, too. The Comet S2 Cabrio (which will set you back $1,797,000 in-game bucks) has been added, while the latest GTA Online prize ride is the Euros two-door sports car. You can nab this by earning a top-three spot in nine Pursuit races.

The new GTA Online podium vehicle, meanwhile, is the Raiden four-door electric sports car. For the latest round of discounts available this week, check out Tez2’s tweet below:

If you’re after tips on how to start GTA Online’s Contract missions or the price list for all GTA Online Contract vehicles, you know where to click. If you’re on the lookout for more crime games like GTA or open-world games on PC, we’ve got you covered there, too.