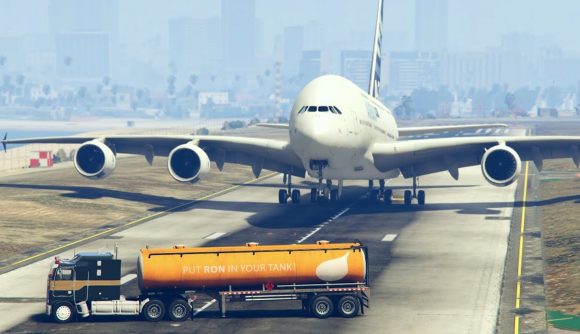 On Twitter last week, Pakistan’s Awami Tehreek secretary general showed a video of a passenger jet pilot narrowly avoiding an oil tanker parked on the runway during landing. He calls it a “miraculous save,” and it is that – but the stakes for that save were pretty low, considering this was a Grand Theft Auto V clip.

Khurram Nawaz Gandapur was unaware that he’d posted a game video, but the internet quickly made him realise his mistake. His tweet earnestly describes the clip: “Narrow escape of an aircraft which could have ended in a great disaster. Miraculous save by the pilot’s presence of mind.”

Sadly, the tweet has since been deleted, though you can still see an archived version (via News18), complete with plenty of comments informing Gandapur of his mistake. In fairness, the clip – nah, I can’t even joke, the video is very obviously computer generated. Though, in fairness, I imagine I’ve played a few more videogames than Gandapur has.

The original clip comes from YouTuber the UiGamer, and was posted a few weeks ago.

Check out the video for yourself above.

Read more: Get real with the best PC simulation games

GTA V sales have shown that it continues to be one of the most popular games in the world, though I’m not sure exactly what this whole situation says about the game’s place on the global stage.