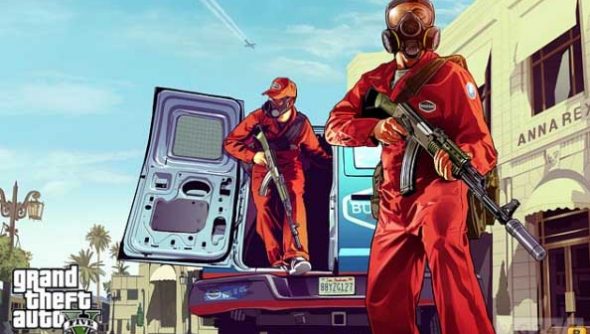 With Grand Theft Auto V on its way to PC, eagle-eyed trailer watchers have already noticed that there are notable improvements being made over the old console editions. Heavier traffic, improved foliage, and even new breeds of wildlife have already been spotted, but news from the Twittersphere this weekend reveals that graphical enhancements are not the only new menu item.

Cara Delevingne, a British model and host of Los Santos’ Non Stop Pop FM radio station in GTA V, revealed on Twitter and Instagram that she has been recording new material for the re-release of the game.

Back with @rockstargames to update my GTAV radio station Non Stop Pop FM for new versions coming this… http://t.co/ef2VSb0g9G

For anyone who has already played GTA V on console, this at least means that your ears will be treated to some brand new material when cruising along the freeways of the west coast. It’s probably reasonable to guess that the other radio stations are receiving similar treatments too, but if that never comes to light that’s not too bad: Non Stop Pop FM is the only place you’ll hear All Saints’ Pure Shores, so you clearly shouldn’t be listening to anything else.

For those unfamiliar with GTA V’s radio stations, you can be safe in the knowledge that when the game finally pulls into the PC garage you’ll be hearing the definitive version of Los Santos’ airwaves.

As for that release date, despite recent rumours that a delay will occur, Rockstar is adamant that the game will still release in the “Fall 2014” window. When the topic of the delay came up in the Rockstar Support Forums, a Rockstar representative stated that the “release date has not changed”.

Thanks Videogamer and IGN.