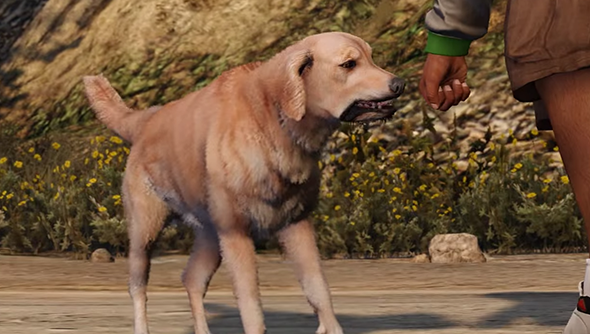 You don’t have to be some sort of computer wizard to know that dogs exist at the forefront of technology, riding the cusp of innovation on their digital surfboards, barking commands into their Google Glasses and running all sorts of simultaneous downloads.

Modern dogs operate on the cutting edge of cyber-science, transforming into binary versions of themselves on the daily, replicating their canine code and spreading aross the web like an electric smell.

So it’s hardly a surprise that the PC version of Grand Theft Auto V features all kinds of new breeds of dog, types of pooch simply not seen in the decaying Xbox and PlayStation versions.

The following dogs have only been made possible thanks to unfathomable advancements in the processing power of computer graphics chips, as well as the unknowable dark potential of the cloud. They are, undeniably, next-generation dogs.

God damn, look at this dog. Admire each one of his individually rendered hairs, which catch the light of the setting sun like so many burning gossamer threads.

We cannot see this dog’s incredibly detailed 3D face, but etched upon it is surely the stoic expression of a dog imbued with such advanced artificial intelligence as to allow him to think “I’m going to bark at that tractor thing if it stops here. Is it… stopping? No, no it’s just driving past. Okay, well in that case I’m just going to sit here and see what else happens.”

Hello! Talk about a bad fur day. Either this unkempt canine is some sort of curly coated mixed breed, or it’s the end result of a series of sadly preventable rendering errors. Either way, this perky pooch looks hot to trot, owning the sidewalk with its purposeful stride and a breezy attitude that is sure to turn heads.

Mouth already agape, this attentive dog is more than prepared to bark all up on you. It won’t think twice about it, and that’s a guarantee. By all accounts: a good dog.

Blink and you’ll miss it: this camera shy poodle can be spotted hot-footing it over a bridge in the background of the most recent Grand Theft Auto V trailer. It is dutifully accompanying its owner on a morning jog, ensuring she comes to no harm in the course of her daily activities. That’s the first line of the canine code, ya dingus.

Tired of squinting at that pooch-in-profile? Well try this on for size.

Bam, headshot. This poodle’s coming right for you, revealing the bouffant detail of this breed’s distinctive and procedurally generated ‘do. In fact, the poodle appears more times than any other kind of dog in these new Grand Theft Auto V trailers. Three times as often. Proof that you can never have too much of a good thing.

Nice try Rockstar, but this aloof little gentleman didn’t escape our attention. This background pug may have taken up only a handful of muddy brown pixels on our screens, but he’s taken up every cubic meat-inch of our hearts. Look at him go, unleashed and marching through a virtual world that is his for the taking, guided by his insatiable desire for adventure as well as the predefined pathfinding routines from which he can never escape.

Nobody can deny that this truly is a dog in a Grand Theft Auto V trailer.