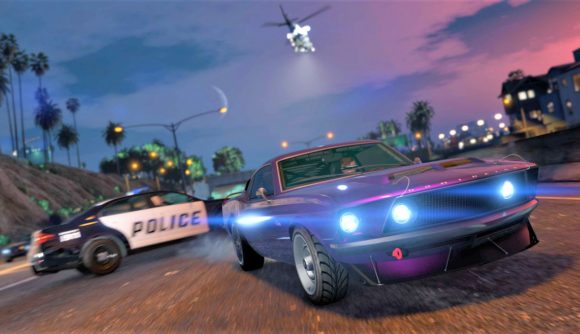 It’s Thursday, GTA Online fans, which means one thing: another fresh batch o’ content to dive into. This week we’ve got the usual spread of reward boosts on some of the crime game’s various modes, a smattering of discounts, a new prize ride, podium car, and some new sets of wheels for the test track – and the Union Depository Contract heist is now live to play.

This new heist sees you break into the Union Depository’s vault to nab the stack of gold stored inside and then get it to your client, and is part of the ongoing GTA Los Santos Tuners update. As with some of the game’s other contracts, this one will need you to do some prep work as part of free mode and then head to the vault to carry out the big finale once you’ve wrapped up all your groundwork.

Elsewhere this week, the new GTA Online prize ride is the two-door sports coupe Cypher, which you can nab if you score first place in five street races. It’ll set you back $1,550,000 (or $1,162,50 trade price) in GTA bucks. The latest GTA Online podium car is hefty Landstalker XL SUV, while the new test track rides up for trying out are the Cypher, Dominator GTT, and the Previon.

The latest weekly update also brings some generous triple RP and GTA$ rewards on the Tiny Racers adversary mode, while there’ll be double rewards on Auto Shop contracts and the Cayo Perico update’s DJ request missions. This all comes from GTA fan Tez2, who’s posted about the new update on Twitter – check out the full details below:

Here are the discounts on offer this week with the latest update:

The official Rockstar newswire post will drop later today, but why wait? If you’re keen to go dip into the above, you can go right ahead now that it’s all live in the game. If you’d like to see the rundown on all of the new GTA cars in the Los Santos Tuners update and find out how to join the GTA LS Car Meet you can head to those links for more details.