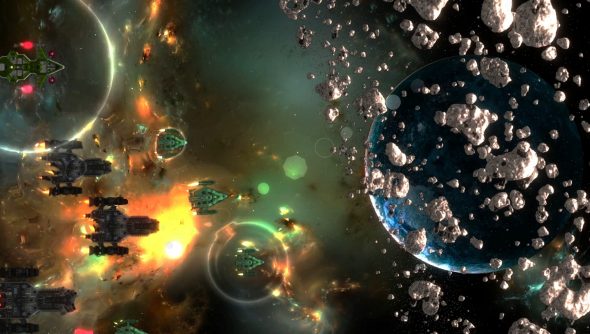 Gratuitous Space Battles 2, the modular spaceship strategy sequel, hits open beta today. At least, that’s what an email told me. But emails cannot be trusted! It is indeed now in beta, but it’s only open to that that pre-order the game first. By doing that, though, you will certainly be getting some very gratuitous space battles. You can cast your eyes at the laser light show below, in the beta trailer.

Alpha and beta mean so many different things to different developers, and with the advent of Early Access the terms have become almost meaningless. Positech founder and GSB2 creator Cliff Harris has explained what you can expect from the beta on his blog.

“Note that this is a proper beta, not some super-early-access proof of concept thing where most of it doesn’t work. In other words, most stuff works! it’s playable. Hopefully its fun! It’s PC-only and English only for now, but that will change come-release. There will of course be bugs, and myriad balance issues. And I will be adding some extra voiceover and a few other bits and pieces. But hopefully this is something you can play and enjoy right now. You get a download link, an online serial (for challenges, if you want to use them), and a steam code for its eventual steam release (the code obviously isn’t working yet).”

If you’ve not played the original (you should, it’s superb) then here’s the skinny: Gratuitous Space Battles is all about building big armadas and making them fight other big armadas. In space. The battles themselves are hands-off, and are really won at the planning stage. The setup of your fleet, the modules you’ve used on the individual ships, and the pre-battle orders you give them are all going to dictate what happens when you hit play.

The sequel’s got lots of lovely, fancy new lighting, new modules, and significantly more customisable ships. When I had a chat with Cliff Harris last year, he said that Gratuitous Space Battles 2 would be a “whole new world”. You can get into the beta by pre-ordering here.