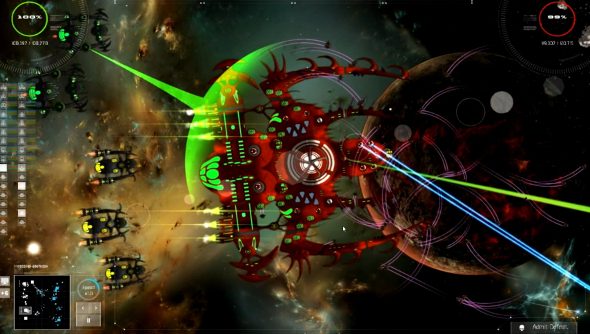 The lovely thing about Gratuitous Space Battles 2 development videos is that, even if you’re not all that interested in the new features – though you should be, as some could be rather game changing – you’re in for a visual treat. It’s a gorgeous game, all bright lasers and glowing nebulae.

In the latest trailer, Cliff Harris introduces new saucer ships, fancy support beams and improved fighter AI. He also shows off some of the pretty procedural damage. Take a look below.

Those new ships should keep Federation and UFO lovers pleased, while colourful beams of energy that enhance shields and engines should be welcomed by everyone, because who the hell doesn’t love pretty glowing things in space?

The engine support beams in particular are actually really nifty, as support ships can act like tugs for the larger vessels, pushing them across space, so those big ships can focus on offensive modules and just slot in crappy engines.

A few days ago Harris also mentioned that all four races will be in the game within the next month.