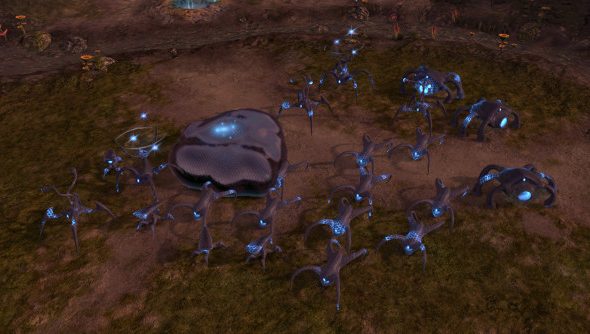 When Petroglyph unveiled their newest RTS, Grey Goo, the one thing they weren’t showing, or even describing, was the damned Goo from the title. They weren’t even willing to give a hint of what was coming.

That made it easy to underestimate Grey Goo. Without a full understanding of the factions, Grey Goo doesn’t look nearly as interesting and potentially revolutionary as it actually is.

Petroglyph are an old-fashioned RTS studio in some ways, and their Command & Conquer lineage may show too clearly for RTS fans who’ve prefer Relic’s more wargame-like approach, or those who think Blizzard’s style is the height of the old-fashioned RTS. Petroglyph, by contrast, have generally made games that stick to the old “gather, manufacture, and rush” formula.

But Grey Goo breaks from that tradition in some key ways, embracing asymmetry so fervently that its human faction is slightly disorienting and its titular Goo faction is what cognitive scientists would call a “mindfuck”. If you’ve ever wondered what life would be like as a galaxy-conquering blob of biomechanical metal, has Petroglyph got the game for you.

As designer Andrew Zoboki put it when we talked at E3, “The traditional [model] has been the last 20 years for Petroglyph. …Sometimes a change is needed. Change is good. Did we throw the rulebook out the window? It’s not entirely thrown out the window. It was torn in half, and half of it went out the window. We kept half and played with it.”

RTS games like C&C, let’s call them harvester RTS games, follow a familiar pattern. You have your base and then, somewhere out in no-man’s land, there are scattered resources you need to build more stuff. This is distinct from the StarCraft model, where resources are conveniently within a base expansion zone, or Relic’s approach, where resources are centralized nodes that must be held.

Harvester RTS games, then, tend to force players out onto the map in order to protect their harvester units and snipe their opponents’. But the base itself is limited in its usefulness for the turtler, because the resources you need in order to carry on the fight are difficult to defend. 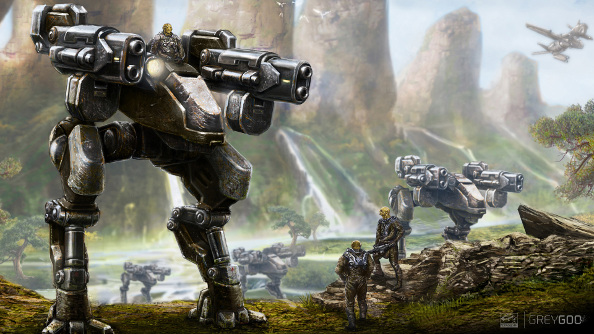 Grey Goo turns this tradition on its head because of the different ways each faction uses space completely differently, and therefore has a completely different relationship to the map. The meat-and-potatoes faction, the Beta, are a race of industry-mined aliens. They can construct buildings anywhere, and can therefore expand anywhere on the map. They can defend their mineral patches with a nearby base, or plant a factory on their enemy’s doorstep and start drowning them in reinforcements.

So far, so familiar. I enjoyed playing the Beta a lot, but they were so familiar that I was doubtful Grey Goo would offer a whole lot that RTS fans haven’t seen before.

Things get a lot more interesting with the humans. The humans are actually more alien than the Beta. They are, as the team at Petroglyph explained, meant to suggest our current obsession with clever electronic gadgets and automation. As a result, the humans don’t really fight their own battles. They wage war by remote, using robots and drones to project power across the map.

But that also means that the human faction is always tied to a central node that supplies power to its facilities. Their base is a baroque network of conduit, manufacturing facilities, defenses, and modular upgrades. If the humans want to extend their base to another location on the map and seize some valuable terrain, they have to build a daisy-chain of buildings and power cables to get there. And if that chain gets cut, everything shuts down.

This means that the human faction is not just about waging war. The real high-level skill of managing the humans is playing Tetris-SimCity to maximize the efficiency of their expansion. 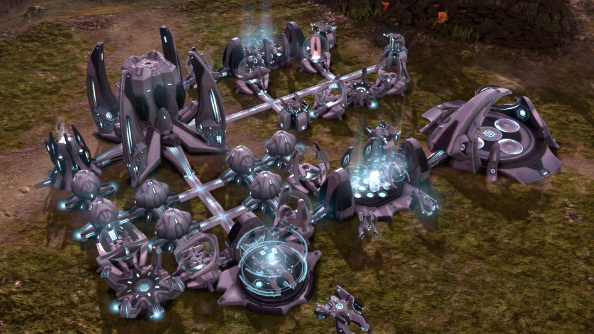 It makes for some fascinating dynamics, especially because the humans are masters of teleportation. Once they have laid-down some buildings, they can warp them to other nodes on their base. So if you have played your cards right, when the enemy shows up from an unexpected direction and starts ripping into important production facilities, you can immediately start teleporting you bases defenses to the correct location. It also means that one you have extended your base to a new location, you can rapidly deploy your infrastructure there.

Put another way, the Beta can go anywhere on the map and use it how they see fit. The humans, by contrast, become a part of the map. Their base effectively reshapes the geography around them.

At E3, however, I finally got my hands on the Goo. The Goo is nano-sentience run amok, and they behave COMPLETELY differently from anyone else.

In the fiction of Grey Goo, the humans and the Beta both find themselves confronting an onslaught from sentient, merciless nanomachines. While the two races are battling for control of a lush alien world, the bigger threat is the life-destroying adversary who bursts into the middle of their skirmish. It was crucial for Petroglyph that the faction fit the fiction.

When you play as the Goo, you start as a blob: a “mother Goo”. You’re like an awesome sourdough starter of death. You ooze across the landscape, ignoring blocking terrain like mountains, and suck resources straight off the ground. You don’t need to stay to harvest them, but simply move on to the next resource patch while the original patch recharges.

The entire concept of a base disappears with the Goo. Instead, you get a flock of these mother Goos going on a migratory circuit, sucking up resources and spawning hordes of killer machines. But the mothers themselves are also formidable: they can destroy units simply by blobbing over them. In fact, that’s one of the most effective things to do with them. 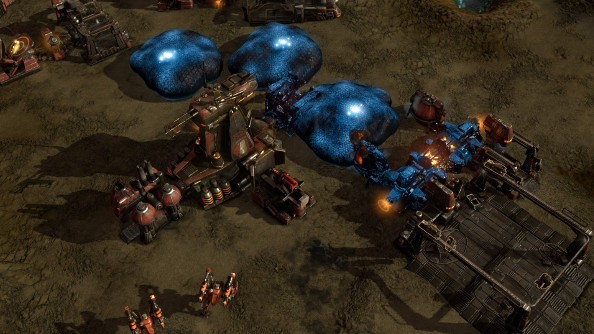 I lured an army of Betas into a firefight with one of my scouting armies, and held them at bay next to a bluff while my units defended the ramp. The bluff blinded them to what was coming from above: a giant, undulating mass of gray death. The Goo poured over the rocks with some truly remarkable (and gross) fluid dynamics, then lunged over the hapless Betas and swallowed them whole.

I don’t even know how the Goo will end up working for advanced players. The risks and possibilities are enormous. The lack of base structures makes the mothers extremely vulnerable if they get caught-out, but the Goo also have complete freedom of movement across the map. There is nothing stopping them from appearing at someone’s front door, spawning a mob of units, killing the harvesters, stealing the resources, and then vanishing back into the fog of war.

It’s exciting to see Petroglyph pushing asymmetry this far. Petroglyph really are doing some of the most interesting faction design I’ve ever seen in an RTS, and it plays off the relative simplicity of their systems. It will be fascinating to see how the factions interact in Grey Goo, especially in multiplayer, when it comes out this fall.