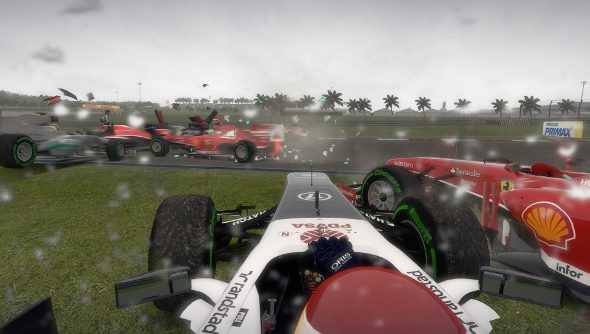 Over the weekend, news broke that the UK’s racing game stalwarts, Codemasters, are undergoing layoffs. The total number of potential layoffs reported so far is fairly small, and concentrated among marketing staff, but supposedly the Grid and Dirt teams may also take a slight hit as a part of the process.

Codemasters are in an odd position right now. F1 2014 was the most phoned-in game in a franchise that has at times struggled to justify each new season’s edition. Tellingly, it was also available only on PC and older consoles, so it seems clear that Codemasters had to go to a longer production cycle for their next-gen F1 game, and could not continue where the enjoyably different F1 2013 left-off.

So at the moment, Codemasters are a racing studio without a flagship racing game, a genre that’s traditionally been a showcase for the latest graphics technology. It’s an encouraging sign that the F1 2015 team seem to be unaffected by the layoffs, and hopefully that game will prove to be a triumphant entry into the current hardware generation for Codemasters. But for now, the studio is stuck playing the waiting game with games for older hardware.

Nor has the studio done itself any favors with misfires like this crummy port of a mobile Colin McRae game, though they were admirably quick to own up to the mistake and make it right with customers. They also got back in touch with their core racing values with Grid Autosport, which retreated from Grid 2’s American muscle and exotic tuner bombast for a more classical focus on high-performance circuit racing.

According to Eurogamer, who broke the news of the layoffs and got in touch with a source at the studio, there are 50 jobs “under review” and 30+ of them will likely be eliminated. Eurogamer reported that, “Redundancies are focused on the company’s brand and IT departments, which are based in Codemasters’ headquarters in Southam, Warwickshire.” However, their source also indicated that some development staff for Grid and Dirt are also at risk.

That certainly raises the pressure on F1 2015 to Ferrari-at-the-Italian-GP-like levels, doesn’t it?