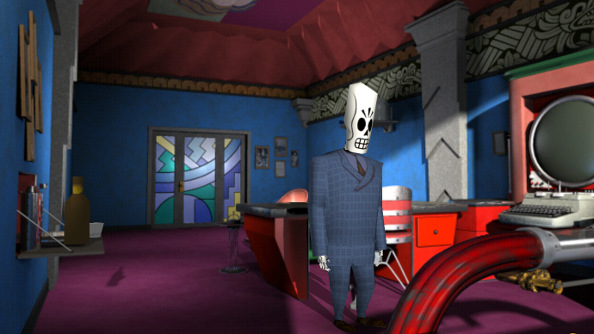 The remastered Grim Fandango is coming out on January 27, and GOG just started taking preorders for it. For just $14.99, you’ll be able to play the coolest adventure game ever made, complete with a re-recorded musical score and developer commentary.

It will also be out on Steam and the Humble store after launch.

Look, you can argue all day long about what is the best adventure game of all time. The Last Express, Gabriel Knight 1 or 2, one of the more recent Wadjet Eye offerings, Day of the Tentacle… you get my drift. Sometimes, when adventure game fans get deep in their cups, some will even confess the love that dare not speak its name: Phantasmagoria.

However, the fact that Grim Fandango is the coolest adventure ever made is not really up for debate. From the first-rate jazz score to the Latin and Aztec influenced Art Deco style used throughout the game, Grim Fandango is cooler than James Bond having a martini with Barbara Stanwyck at Rick’s Cafe in Casablanca.

And for ages, playing Grim Fandango has required becoming versed in the myriad tools and patches that the terrific fan community used to keep the game running into the modern era. But now, we’re finally getting the lavish re-release the game deserves. I just can’t wait to listen to the commentary for the game, and to hear the re-recorded score blasting through my headphones.

Tim Schafer sounds pretty happy about this turn of events too.

Two things jump out at me in that video. First, holy cow, were PC game boxes really that huge? You could deliver a pizza in that thing. Second, Mr. Schafer is correct: the “tank” controls were fine and everyone should have stopped whining about them years ago. Manny Calavera’s labors are arduous in this game, and they should feel arduous. The tank controls were like Oculus Rift for your fingers.

You can preorder right here.