Until now, Grip has been an arcade racer with its wheels firmly on the ground. Sure, its combat vehicles may flip over and drive across the ceiling at times, but the spinning rubber powering your metal monster has always kissed a surface. That burning-hot smooch is tempered with the arrival of AirBlades – anti-grav vehicles that hover above the road.

For anyone who remembers the arcade racer’s heyday in the ‘90s, this free update is more than a different way to play Grip – it’s a fusion of two of the genre’s most beloved games. Grip, as it was originally released, is a conscious effort to follow in the tyre tracks of Rollcage. But the AirBlades update brings all the futuristic racing of the iconic Wipeout series to the game, too.

You can drive both types of vehicles across all of Grip’s tracks, including the new space-based circuits added with the update, which is a feat in itself – one that technical director Robert Baker and game director Chris Mallinson explain to us in detail. The pair also discuss how adding anti-grav racers fulfils an old dream, the technical challenges of balancing the new vehicles, and the joy of helping to rejuvenate a genre that’s so close to their hearts.

PCGN: Is a blend of Wipeout and Rollcage something you used to fantasise about back in the ’90s?

Robert Baker: Yes, there’s some truth to that. Back then there was a healthy rivalry between the Rollcage and Wipeout teams. We both worked under the same publisher with the popularity of our games overlapping one another, and reviewers often drawing comparisons between them. But I think to anyone around at the time it was clear that Wipeout got all the kudos and for sure it was a seminal game. It had all the style and the cachet that we could only envy, it entered the public consciousness in a way that Rollcage never quite managed to do. It was an obvious thought, to wonder what a game that merged these two worlds would look like. Wouldn’t that really be something? It’s taken a long time for us to find out. 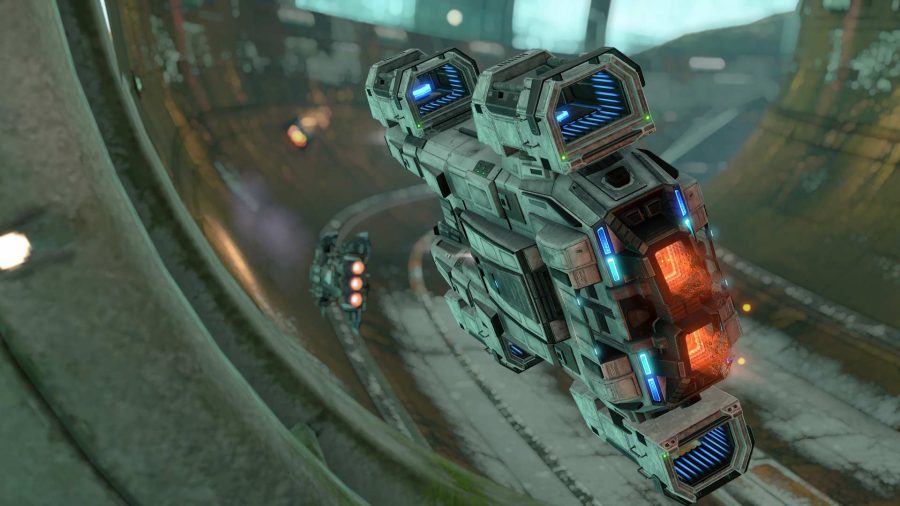 Was anti-grav racing always going to be added to Grip, then?

RB: It was a tentative part of the plan from quite an early stage, yes, but it was always a secondary consideration until recent months. The primary purpose of Grip was to bring back the Rollcage experience to a modern audience. Not only was that a big enough ask in itself, it was also important not to confuse the message about what the game was at launch – it had to be what players expected, what players wanted. We delivered on that promise. Now that they have our back and we have their trust, this is the time to drive things forward and evolve the game and truly give Grip its own, unique identity.

there was a real feeling of coming full circle. It just felt right

But getting to this point, getting the Rollcage vehicle model right, was exceedingly difficult. The number of physics and collision problems we’ve had over the game’s development have been quite overwhelming, even seemingly insurmountable at times. Often I would turn to Chris and ask ‘can’t we just do Wipeout instead? It would be so much easier’.

And the frustrating thing was that we knew exactly how easy it would be, because we had a prototypical anti-gravity model in the game a couple of years ago and it didn’t suffer from the same problems that the wheeled vehicles, the Rollers, did. Thankfully, however, our perseverance paid off and we finally got it to where we wanted it to be, then the work we did on finishing AirBlades was a relative breeze and actually a real joy.

So it wasn’t too much of a challenge to get anti-grav and wheeled racing styles to work together?

RB: It was tough in some cases to make the cars – which were previously designed around wheels alone – work well with the wings or canards that we’ve now added. It was just a question of design, and taking a step back to look at the particular design of each vehicle manufacturer, figuring out how we can work with that to produce canards that fit visually with them. Whereas rims and tyres are pretty interchangeable across all vehicles, canards are now intrinsically designed towards specific manufacturers. But it was a wise decision, and we think we’ve nailed the end result.

Performance-wise, the AirBlades were initially dominant in the race results which, of course, we didn’t want. But it wasn’t immediately clear why, as most of the vehicle stats were identical to their wheeled brethren. We tried modulating the acceleration, the boost, the top speed, but none of it really had the reducing impact were looking for to bring the game into balance. In the end it turned out to be the superior cornering ability that we initially gave them that literally gave them the edge. Once we reduced that things really started to merge nicely, and the amount of work we’ve had to do since has been fairly minimal.

The only real problem was the AirBlade’s innate desire to slide onto any surface they encounter, which had them rolling over onto walls they weren’t supposed to, and often getting stuck on them when they did. We looked carefully at the specific causes for this and engineered handling responses that countered them. We thought we may have an uphill battle on our hands trying to tame these situations, but honestly things fell into place very easily compared to our earlier problems with the Rollers, it was like these AirBlades were simply meant to exist. 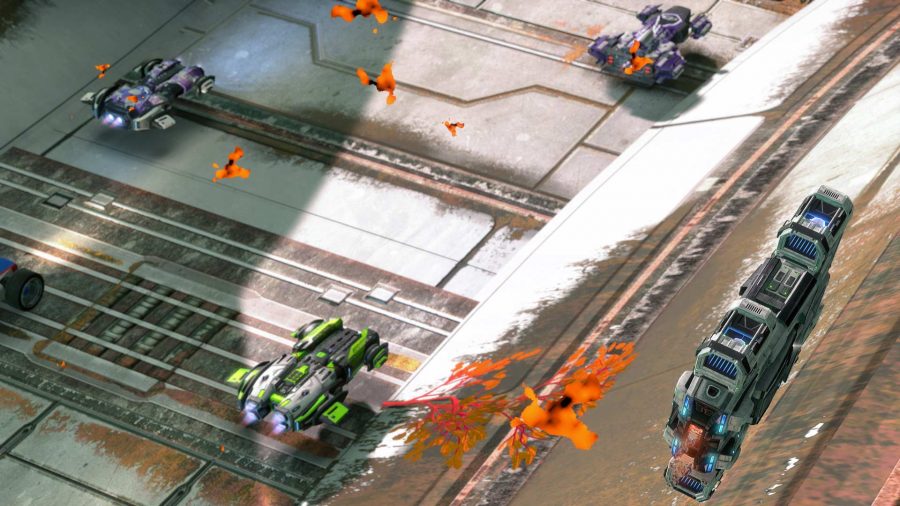 Have the existing tracks been altered at all to accommodate both classes?

RB: We did need to make a few alterations, but not as many as you might think. Changes to AirBlade handling to accommodate the problems presented by the tracks seemed to be the better solution, and this is where we focused our efforts. I’m sure you can count on one hand the number of changes that we made to the tracks directly for specific vehicle types. Instead, we coincidentally at this time concentrated on making changes to have tracks be more accessible in general, to reduce the frustration that some players were having with the difficulty level of Grip.

Did you approach the design of the new tracks differently with AirBlades in mind?

RB: No, this wasn’t necessary as the essential characteristics of the AirBlades and the Rollers are shared between them – a track normally works well for either both or neither of them. Both of the new tracks flow very well by design and both vehicle types perform solidly as a result – they’re a real treat to play. One in particular might be recognisable to fans of the original Rollcage, a track we crafted as a respectful salute to Grip’s forebear whose fans will surely love. Certainly for us, there was a real feeling of coming full circle. It just felt right. 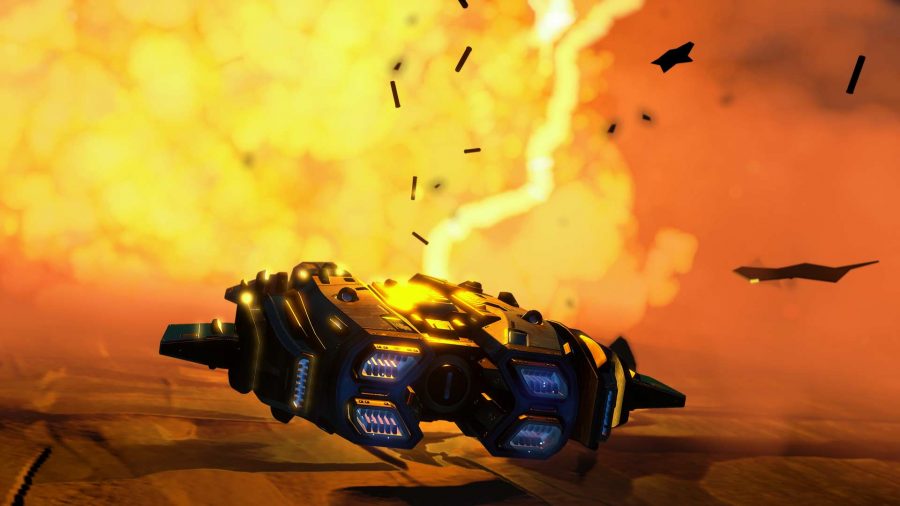 Which style of vehicle do you prefer?

RB: This is an interesting question because you’d think that naturally you’d gravitate, if you’ll excuse the pun, towards one type or another. I’m sure there will be players just like that in both camps, but for us the surprising thing is that every few hours we like to alternate between them. The feel of the AirBlades is really quite different to that of the Rollers and you get that beautiful, surfing motion and a sense of superiority as you glide above your ground-based opponents.

It's a big achievement, and it's all come together quite nicely

In turn, the Rollers – because they’re closer to the ground – feel faster, more connected as you rip up the dirt trying to keep things under control. Both feel great in their own, unique ways, and each time you switch type it’s like new life has been breathed into the game no matter how many hours you have under your belt. Without really knowing it ahead of time, we’ve given the game some real longevity here.

How has the arcade racer changed since its heydey during the ‘90s?

RB: It would be foolish to try to assert that these kinds of arcade racers have remained as popular as they were back in their youth, but it’s not very easy to understand why. It’s like the whole genre shifted towards sims, forgot its roots and somehow lost a piece of its soul along the way. For the longest time combat racers, especially on PC, were all but lost. But things are changing again and there’s been a resurgence of great titles recently including Redout, Distance, Pacer, Antigravitator, etc. This is heartening. We’re now seeing a real diversity which is energising the whole racing genre. We’re thrilled that we’re playing our part in the revolution. 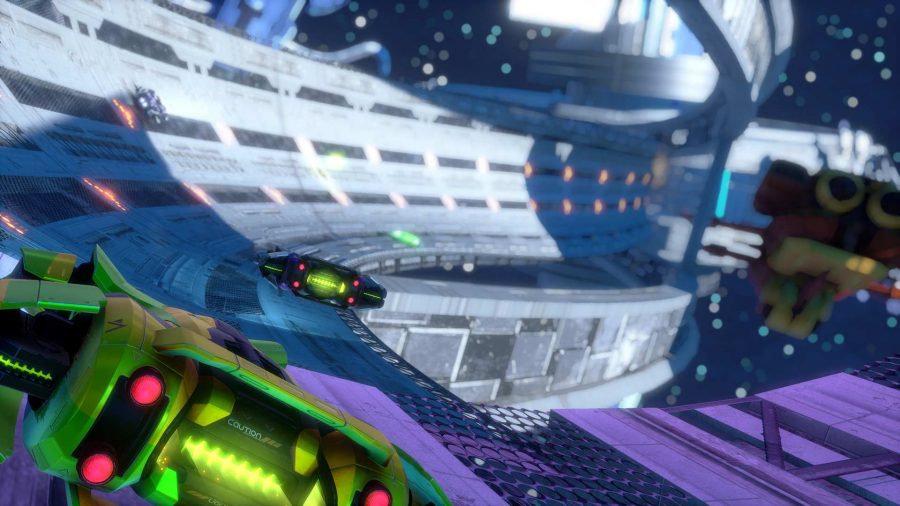 What has the reception been like for the base game?

RB: For a game that’s actually very challenging, especially once the difficulty level ramps up, the reviews have been remarkably positive. We had anticipated that it would be more of a Marmite game, with people either loving or hating it, than it has proved to be. It’s a hardcore game, that has somehow found mass acceptance. We’re very happy with the ~90% positive reviews on Steam for sure, and it seems most people have taken to it like ducks to water. It’s a very rewarding game for those who like it – our dedicated and passionate community can attest to that. Likewise, it’s very rewarding for us to hear their passion for what we’ve done.

Do you plan to add any new modes that focus on just one style of vehicle?

RB: As a core design goal it was critical to us to keep the vehicles interchangeable as each will attract their own fans. We didn’t want to discriminate between them. It was important to give each their own unique feel, their subtle advantages and disadvantages, but to have shared abilities overarching all.

Vrooom: Steer yourself into the best racing games on PC

We’d like to add more MP modes in general at some point, but we need to prove the Arena modes can work well first, and this means spending some time improving the Deathmatch experience and making that a must-play deal. If we can achieve that then we’ll look at expanding the Arena game modes out more widely.

Are we likely to see further profound changes to the nature of the game in future?

Chris Mallinson: It’s been over four years since we started this endeavour and the effort involved in raising it from the ground has been immense. AirBlades are pretty huge in terms of a game’s update. Grip is essentially two games in one now. I don’t know any other game that has both wheeled and hover vehicles in the same race, or semi-realistic physics for hover vehicles in general. It’s a big achievement on the team’s part, and it’s all come together quite nicely, if I may say so. But I’m a bit biased. Still, more content is on the way that will add nicely to the Grip package. We’re still working away on it.

This feature was co-authored by Chris Priestman and Ben Maxwell.