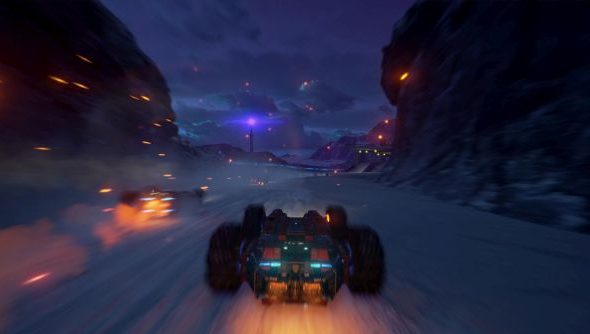 Rollcage occupies a very specific part of my brain dedicated to games that I played the demos of, on repeat, for years back when I was not only unable to upgrade my PC but far too poor to get new games regularly. It, NHL ’98 and a few others get a special place in my heart, and so I was excited by GRIP back when it was announced to be coming to Kickstarter as an intended spiritual successor to Rollcage. That project failed but they promised to still come to Early Access eventually – which they now have, with a new trailer, new hotness and a cheap price tag.

Here’s the Early Access trailer, which does a rather succint job of telling you everything you need to know about driving on the ceiling while firing hailstorms of bullets:

We’re currently contacting the makers of the world’s dictionaries to have the definition of ‘rad’ replaced with an animated gif of the above. If its predecessor is anything to go by, most of your time will be spent wrestling to keep everything progressing smoothly on semi-non-linear tracks, picking up weapons and blowing up opponents.

The Early Access build, naturally, is lacking some features. There’s only a single car, though three modes and seven maps to mess about with it on. They haven’t implemented proper multiplayer yet, but do have split-screen if you don’t mind keeping things in-house. It’s a work in progress, and they aren’t even planning to have it done until the end of this year at the earliest, with much more beyond if they get enough sales. Standard delays would see it not releasing until 2017. 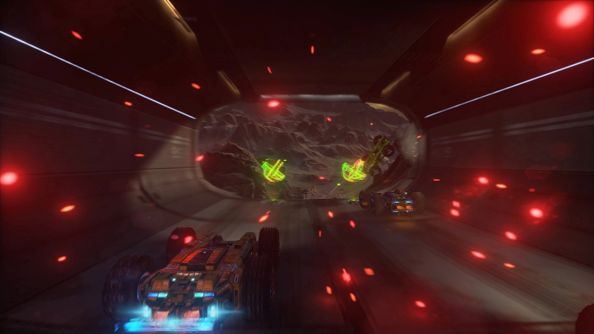 At £11.99 / $15.99 / €15.99 for what is a limited game to begin with, it’s not something I’ll be picking up immediately, but I’m desperate for a new, good game in this style so I hope it expands. Split/Second was the last time I found an arcade racer I really enjoyed, and that wore thin over the years. Caged Element have this to say about what the release version of the game will look like:

“The full version of GRIP will have 8 cars (4 classes), 12 tracks (4 planets), 10 pick-ups, career mode, arcade mode, arena mode (with arenas), precision mode (with a few tracks), elimination mode, multiplayer (online or local LAN and split-screen), mod tools for custom cars, and (depending on funding moving forward) a track editor so players can build their own courses.”

They’re planning to up the cost of the game as it grows, so if you want it as its cheapest, now’s the time. As always, funding at this point in a game’s lifecycle is a risk, but they’ve made it this far despite thatfailed Kickstarter, so they’re nothing if not dedicated. Have a look at some more details, or pick it up, on Steam.