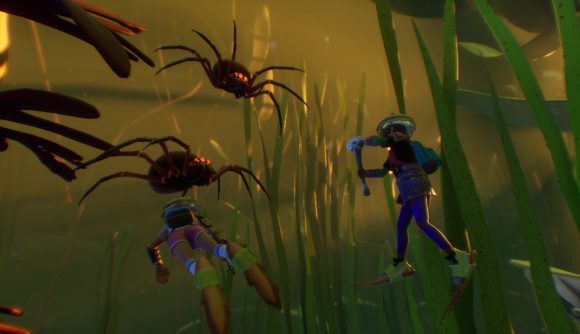 The next Grounded update is due to launch in November, and it’s all about the koi pond. This one will be taking us to the darkened deep, populated by a giant (relative to you, at least) koi fish and – I’m so, so sorry to tell you this – underwater spiders.

The koi pond update launches in November, though it’s available today on Grounded’s test server. Obsidian says this is Grounded’s biggest update yet, with a massive new water area to explore, four new creature types, one updated critter, and a host of new crafting options to help you explore the depths.

You’ll find the pond water darker and murkier the further down you go, so you’ll need to craft underwater lanterns and diving equipment like masks and rebreathers to continue exploring further. Traditional swinging weapons will be less powerful underwater, too, so you’ll need to make use of spears and the new pebblet dagger to fight enemies like the diving bell spider.

Underwater levels and spiders are the scariest videogame concepts outside of horror games, and now we’ve gotta deal with both of them at once.

I asked game director Adam Brennecke if the team is trying to give us all collective heart attacks. “Yes, I think that’s the intention,” he says with a laugh. “We like having the difference between all the beauty and those things that terrify you. Being able to explore both those things – those spiders and the terror of going down and being underwater – is something that is definitely intentional on our side.”

At the bottom of that pond, you’ll find the game’s next big lab, though this is still early access, and more improvements are coming to all the labs – including this one – in the future. Brennecke says that once all the labs have been added to the game, they’ll get revamped with better connections to each other and more robust story content.

Part of that means more “cool moments” at the end of every lab, similar to the machine explosion in the current story, which will have major effects on the world around you – and Brennecke hints that you might have some sway over what happens, too. “We like doing that kind of stuff at Obsidian. We like having choices where the player can decide between two or three options, and then those options will affect the gameplay experience.”

We’ll start to see how that plays out once Obsidian completes what it’s calling ‘act one’ of Grounded, which will also include improvements to the haze and the hedge, and a new area called the sandbox.