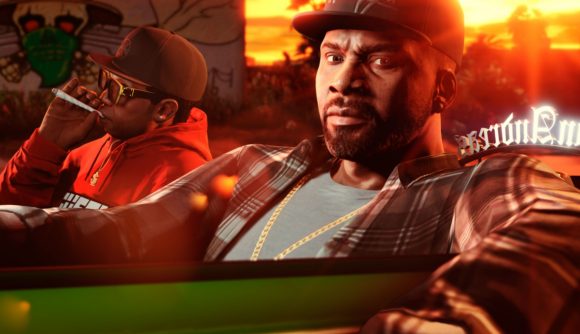 The last big update for GTA Online added The Contract, a new story that had Franklin working with Dr. Dre (as himself) to recover some stolen recordings. But arguably the best stuff in the update was locked behind that VIP contract mission string: Short Trips with Franklin and Lamar. Now, everyone in GTA Online can accept those jobs without completing The Contract.

You can access the missions through the Jobs Menu, and now through February 16, they’re worth double the GTA$ and RP they normally award. The story sees Franklin, who’s gotten pretty respectable in the time since the GTA V story wrapped up, and his old pal Lamar sees a chance to do the same for himself.

Now running his own cannabis dispensary chain, Lamar enlists Franklin’s help to deal with a bunch of the unforeseen headaches that go along with a start-up business. It’s a chance for Franklin to get out of the house for a while, so he’s game to cruise around with his old buddy for a bit (as long as it doesn’t get him in trouble with his wife Tanisha).

See the world through the eyes of Franklin and Lamar in Short Trips.

This two-player story-based co-op is now easily accessible via the Jobs Menu and paying out 2X GTA$ and RP through February 16: https://t.co/9T3jQC54my pic.twitter.com/420tsVNVjB

Once you’ve wrapped up the pair’s string of missions, you can kick back in the studio and potentially catch a recording session. The official Rockstar site has more info on the job, and if you want to know how to start The Contract mission itself, we’ve got you covered.