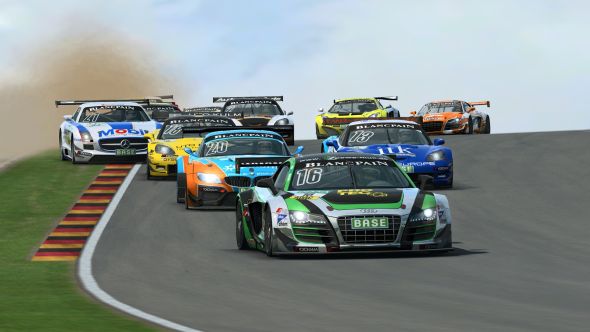 SimBin UK, the newly formed studio named for a defunct-yet-respected Swedish racing game maker, have announced their first project. Working with Sector3 – the devs formed from the ashes of the first SimBin – the UK studio will make GTR 3, a new instalment in the series that made SimBin’s name.

Take a whirl in some of the best racing games on PC while you wait.

The news will delight racing fans of a certain age, and comes via a post on the forums at Race Department.

GTR 3 will be built in Unreal Engine 4 and will share some DNA with Sector3’s RaceRoom, a free-to-play PC racing game that’s divided their old fans. The new game will be aimed at the hardcore simulation fan, but will also strive to remain accessible for the console market.

“It will be proper simulation, but for the console version the casual user is just as important,” says the serendipitously-named Allan Speed, head of SimBin UK. “At some point RaceRoom will switch over to the technology we are creating and we’ll just take that a different route, as in simulation with support for both console and PC.”

It was only in October last year that SimBin UK announced themselves to the world, and development is still at an early stage.

GTR3 was first announced by the old SimBin back when they were still around, and considered one of the finest racing game makers in the business. When they shut their doors, many fans must’ve assumed they’d never get their hands on GTR3, but SimBin UK say they’re aiming to have a playable build ready to show in six months. “It will be one track, weather, damage, a new particle system, physics and AI,” says Speed.

A multi-platform release is due in 2018. Race Department have an in-depth interview with the people involved, so check them out if you’d like to know more.