In the latest Guild Wars 2 story, you and your merry band of warriors face off against the Living World’s biggest threat yet – a crystal dragon named Kralkatorrik. In All of Nothing this colossal beast has been turning everyone into an army of corrupted minions called the Branded, and it’s your mission to face the beast in one final showdown and reverse the damage they have done to Tyria.

This tale is perhaps Guild War 2’s most ambitious to date. We visit the tropical shores of Siren’s Reef, and battle against creepy ghost pirates and Captain Arabella Crow, the pirate queen. We also see the dwarven zone of Thunderhead Peaks now completely plunged underwater, a dramatic side effect of Zhaitan waking Orr from the sea.

In the aftermath, we had a chat with narrative lead Armand Constantine, design lead Lindsey Murdock, and narrative designer Alex Kain to learn more about what went into creating the epic story for All or Nothing.

PCGamesN: What’s your best Hollywood pitch for the new episode? Imagine we’re in the back of a limo and I’m already looking up my next appointment on my disgustingly expensive smartwatch.

Armand Constantine, narrative lead: You mean something like: ‘a band of heroes and their friendly dragon face off against a titanic, world-ending serpent’? Thankfully, the team here really values the narrative craft and we don’t do harried Hollywood style pitches in limousines. If we’re pitching a narrative internally, we take the time to talk about all the crucial elements – the plot, the turns, the characters and their arcs, relevant themes, and how this particular piece of narrative content works in the context of larger stories we want to tell. I think all of that material needs to be examined to judge if a proposed narrative is worth pursuing, and we’re fortunate that we have a process that does so. 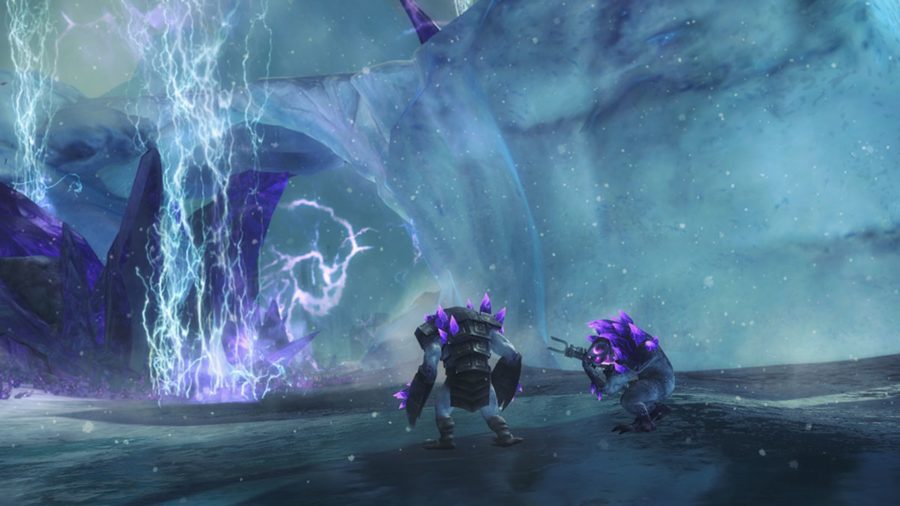 A thousand-foot tall dragon sounds like the kind of thing a writer comes up with, and designers shoot down. How did you sell something as large as that to the team?

Huge stakes are a big part of the kind of stories we tell. But I think it’s crucial to find ways of personalising the villain

Linsey Murdock, design lead: Actually, it was very much the writers and designers being excited about the epicness of it all. Selling the artists was the difficult part since they were on the hook for building those massive assets. In general, all our devs want to really pull off the big epic stuff, it’s always just a question of how. We had to develop new tech to even just get him all on screen.

Constantine: Everyone on this team, regardless of discipline, wants to be ambitious about the content we develop and the stories we tell. What that requires is a really collaborative process across disciplines. You want to tell a story about a dragon the size of a mountain? You need to get everyone involved to figure out what’s possible and what’s not. And often that discussion is less about answering a binary yes or no than coming up with clever solutions for accomplishing things that seem impossible at first glance.

Have any advances in tech at ArenaNet in recent years changed the kinds of stories you can tell?

Murdock: Yes, absolutely. We have gotten a lot more tools to do storytelling in the open world which is why players have started to see more major characters in our maps, and the major throughline of the story has taken place more and more there. It’s been exciting for us to be integrating more of the story with the world. 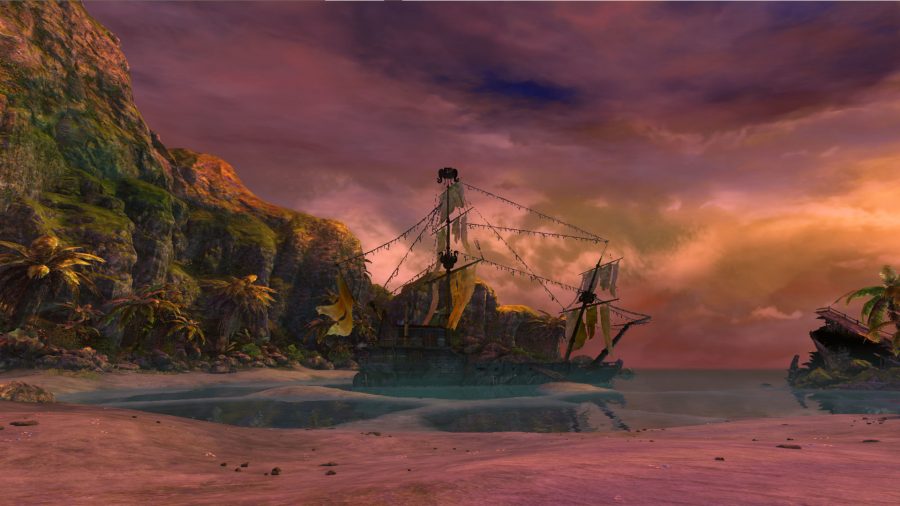 Ghost pirates sound fun, and ripe for comedy or horror – what approach did you take with them for All Or Nothing?

Alex Kain, narrative designer: With the Siren’s Reef fractal, we didn’t want things to veer too far in either direction – ultimately deciding that a balanced combination of the two would suit our story needs perfectly. So, while your group is battling a merciless army of undead pirates or sneaking through a maze with their cursed treasure in hand, your fractal guide, Dessa, offers commentary from a purely rational, logic-minded point of view. For example, she doesn’t like to say “pirate curse” (it doesn’t sound “scientific” enough for her). She also has a fun personal connection to one of the characters in the fractal, which makes these interactions even more interesting.

Read more: Check out our list of the best new MMORPGs on PC

You’ve plunged an original Guild Wars area underwater – what was the impetus for that, and what has it allowed you to do?

Murdock: When Zhaitan rose Orr out of the sea, it caused a massive tidal wave that terraformed and shifted the climate in many locations on Tyria. We have been seeing the effects of that since GW2 launched, with many historical locations being underwater or changed. The way we handled the Ice Floe area was simply a continuation of that. Not all of Ice Floe is underwater in GW2, but some of it is. We have some content in the area that deals with fishing those waters and various chests and gathering of materials in the water. In the parts that aren’t underwater, we have a large scale meta event chain that features dredge, branded, and oil elementals. 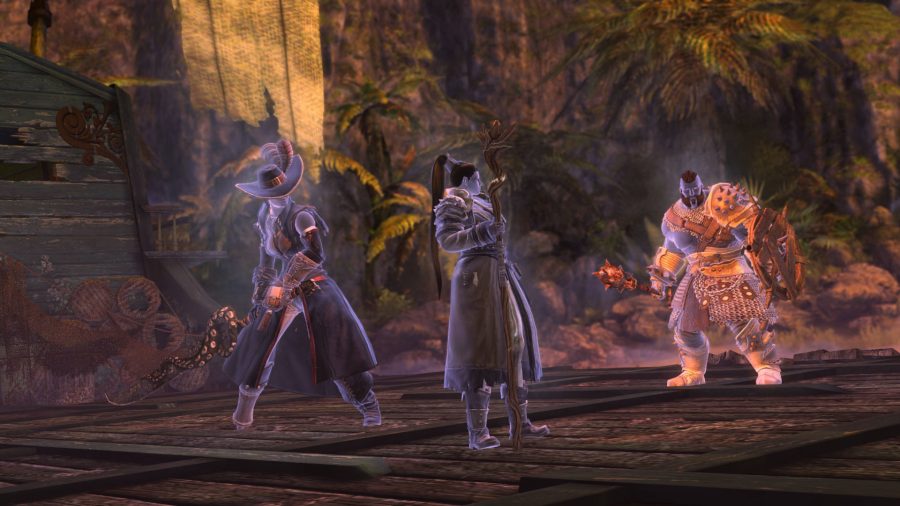 Soap writers perfect the art of incorporating lots of information into dialogue, so that new viewers can pick up the story quickly. Have you developed similar techniques for writing your Living World stories?

Constantine: This is something we think through for each episode. What makes recapping our narrative content a bit tricky is that we can’t be sure how long it will have been since a player was engaged in previous content. One player might be launching into an episode right after completing the previous one. Another might be dropping in after weeks or months. We have to strike a balance – enough to jog memories and remind players of the larger story context, but not so much to clutter our limited narrative real estate with stuff that we’ve said before. We try to find the balance, keeping in mind that the story journal is a useful tool for people to recap on their own time.

Villains have always been a cornerstone of MMO stories, but can also leave players jaded in the long run – if there’s always an existential threat, the sense of peril fades. How do you get around that kind of feeling with a character like Kralkatorrik, especially in a game as long-running as Guild Wars?

Constantine: Huge stakes are a big part of the kind of stories we tell. But I think it’s crucial to find ways of personalising the villain. You look for opportunities to explore the interior life and state of mind of the villain – challenging in the case of Kralkatorrik, but for example, we get a bit of that in this episode from Glint describing her interactions with him and how he reacted to his vision. You also look for opportunities to personalise the stakes through the experiences of other characters, major and minor.
Murdock: Kralkatorrik is particularly unique since the story of Destiny’s Edge centers around the conflict with him. He is, in many ways, the first dragon we confronted so there is a lot of momentum built up for this fight. We did have to pay close attention to the stakes of what we are dealing with and making sure that the player is following along on the importance of it all.


There’s a new legendary weapon in this episode – do you consider it part of your job as writers to add intrigue and backstory to powerful gear, to lend it weight?

Murdock: Not always, no. Some of our legendary weapons have extensive backstories but not all of them. It’s great when we are inspired and have the budget to do something cool, but we don’t consider it required for every rad new weapon. The art really carries these items.

Does community discussion ever inspire plotlines?

Murdock: Not exactly. Community discussion might emphasize to us the things which are important to the player base and guide us to pursue answers to their questions. More often than not, players will touch on things that we were already planning and reinforce to us that we are well aligned. Our players are following right along.

Constantine: Community discussion is a great way for us to get information about player expectations and where their interests lie, which is valuable. But the plotlines and character arcs are developed internally by the team.