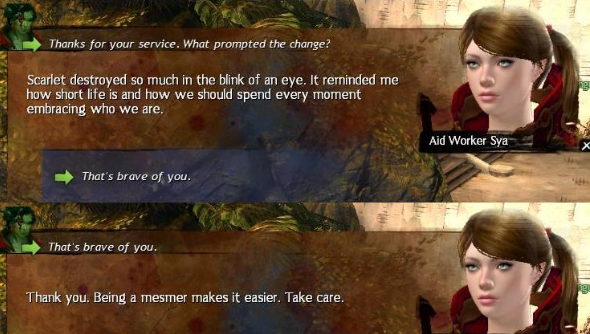 Recently we have seen a number of games embrace a wider diversity of characters, and Guild Wars 2 is adding itself to that number with its first transgender character. Located in Lion’s Arch, Aid Worker Sya can be found admiring the city’s rebuilt architecture.

The new character has been spotted by players on Reddit. Guild Wars 2’s introduction of Sya is interesting as the game has shown her transition from male to female over the course of the story. Before the recent war where much of Lion’s Arch was destroyed, a male character called Aid Worker Symon could be interacted with. Symon is now Sya, and her dialogue reveals that the devastation of the war made her realise she should embrace her true self. Thanks to her magical mesmer powers, the transition was apparently easier.

If you’d like to chat to Sya, she can be found by the Mist Portals in Lion’s Arch.

Guild Wars 2 already has done a solid job including LBGTQ characters with lesbian couple Kasmeer and Marjory, and this further diversity is a great thing. Recently we have also seen other games continue to expand the diversity of their character casts. Dragon Age Inquisition introduced us to Krem, Bioware’s first transgender character, who was fighting alongside the Iron Bull.