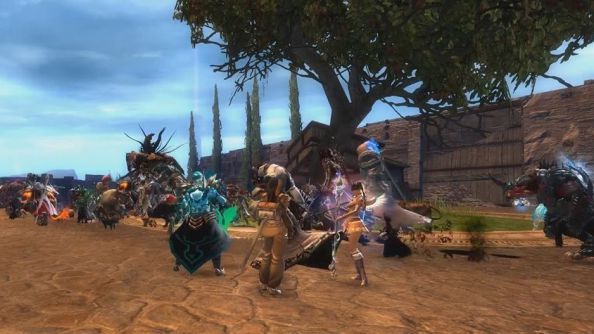 A group of Guild Wars 2 players are holding a virtual Pride march this month in support of LBGT community members.

Looking to join huge communities? Try one of the best MMOs on PC.

Announced on the Guild Wars 2 subreddit, Pride March Tyria will be held on June 26, starting at 5pm PST. Starting in the centre of Ebonhawk, the two-and-a-half hour march will finish at the steps of Rata Sum.

“We march primarily to show our support for gender and sexual minority players, some of which have found Guild Wars 2 to be one of a few safe places to simply be themselves and get away from the drama and the politics of the outside world,” explained SheWhoMews, the event organiser, on Reddit.

The thread includes a timing sheet with approximate times taken to march each location, so players who wish to take part but can’t attend the whole event are able to work out where the march will be when they log on.

The march comes due to June being LBGT Pride month. “Allies and proponents of equality for all are especially welcome to attend as are those who are members of LGBTQIA+ communities,” states the Reddit post.

Further through the Reddit thread, interested players outside of North America are discussing the potential of European-time marches, so if you want to attend but can’t work on Pacific time there’s a chance there may be a march in your time zone, too.