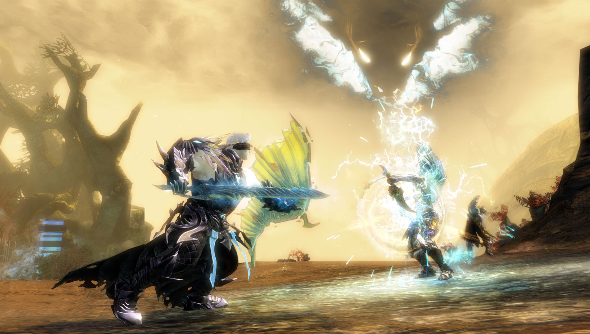 Guild Wars 2 expansion Heart of Thorns brings new profession the Revenant to the game. Each of Guild Wars’ professions can eventually make it to elite specialisation, and ArenaNet have seen it fit to now tell us all about what the Revenant can become: the Herald. It’s a shield-bearing, support-heavy role that looks sure to be popular in a fight.

The Herald allows the Revenant to equip a shield in the off-hand, which can be used to cast a variety of buffs and heals when used with the Legendary Dragon Stance of Glint. Envoy of Exuberance is a skill that buffs allies with protection and a quick heal. Crystal Hibernation is a personal shield spell that regenerates health and ignores any damage and conditions applied to you.

The Herald’s Legend provides five upkeep skills, which mostly focus on granting your allies boons such as swiftness and protection. The Herald also gains a mechanical skill called Facet of Nature, which increases boon durations on nearby allies every few seconds.

As with all Guild Wars professions, the Revenant can fight underwater, and the aquatic abilities for the Herald have now been locked down. The spear-based skills have been announced, and are an even balance of physical and condition-damage styles. Spear of Anguish inflicts increasing durations of torment, and Rapid Assault auto-attacks to inflict vulnerability.

The full nitty-gritty details on every Herald combat ability can be found over at the Guild Wars 2 website. If you’ve yet to try out the Revenant profession in Heart of Throns’ beta, you can read our hands-on of the expansion.