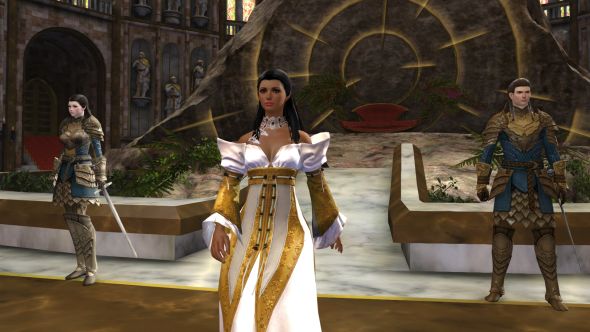 Guild Wars 2’s story is about to take a bold step forward with The Head of the Snake, episode four of the Living World’s season three. Humanity’s Queen Jennah needs your help to uncover a conspiracy against her rule, and you’ll also get to try a new raid wing. To celebrate the added content, the Guild Wars 2 expansion, Heart of Thorns, is half price until February 8.

Guild Wars 2 changes everything you think you know about MMORPGs, and made our list of the best MMOs on PC.

The Head of the Snake goes live on Tuesday, February 7. You’ll be summoned to Divinity’s Reach by the queen, where you’ll “act as her personal witness in uncovering the nest of corruption” in the human capital. The peaceful and egalitarian Queen Jennah has many enemies, and a cult called The White Mantle are working to replace her with a rival. Expect machinations aplenty as these stories progress.

Along with the new story comes the brand-new raid wing Bastion of the Penitent, found behind a mysterious portal in Bloodstone Fen. You’ll face four bosses as you explore the mysteries of this sinister, ancient place.

‘Living World’ is developer ArenaNet’s term for the ongoing plot in Guild Wars 2. Applied via regular free updates, Living World episodes add new quests that tell a progressing story. Generally, Living World content is temporary – it can pass you by if you don’t log in to play it – but it has resulted in lasting changes to the world, such as the reconstruction of Lion’s Arch, a major city. To judge from the trailer, Divinity’s Reach could be next to see some, rather more destructive, changes.

Current Living World content is free to all who own the Heart of Thorns expansion. Good news is, it’s half-price for the next week, and it’s all you’ll need to buy, since the base game is now totally free.

If you’re tempted, head to the Guild Wars 2 store to avail yourself of the sale. The standard expansion, which comes with a max level boost, is available for £17.49, while the deluxe edition (which adds a new character slot and some cool cosmetics) is £29.99. Both prices double after February 8.